Early tracking pegged The Hunger Games at only about half that amount. But box office forecasters have been continually revising their predictions upward based on audience awareness and advance ticket sales. The film opens on Friday in the US.

Hollywood.com box office analyst Paul Dergarabedian said The Hunger Games could approach the $US130 million to $US140 million level achieved by two of the Twilight films.

“Given that this is the first instalment, there’s no precedent for what this movie could do. We don’t have a track record for The Hunger Games,” Dergarabedian said. “This is one of those movies that because of that appeal to virtually every kind of audience, it could exceed even our strongest expectations this weekend. But we just don’t know. Everybody’s speculating.”

A debut of $US140 million would put The Hunger Games into the top five on the all-time charts for domestic opening weekends.

Based on the first of three best-sellers by Suzanne Collins, The Hunger Games stars Jennifer Lawrence as a teenager hurled into a televised fight to the death among other youths in post-apocalyptic North America.

The intensely hyped book-turned-movie was always going to draw comparisons with the vampire saga, but in terms of the films, there was no need. The Hunger Games is in another league.

Brilliantly realised by director Gary Ross, it’s a thoroughly enjoyable, heart-pumping introduction to what will inevitably be a major Hollywood franchise.

The beauty of it, is that it lives up to the overwhelming hype (a rare thing) and its big budget, without feeling like a glossy cash-grab.

Based on the first of three books by Suzanne Collins – who co-wrote the screenplay with Ross – it’s set in a post-apocalyptic North America, where 16-year-old Katniss (Jennifer Lawrence) volunteers to take part in The Hunger Games in place of her sister. 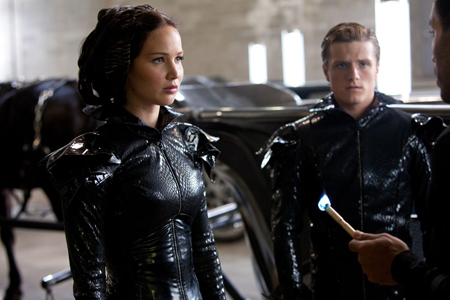 In total, 24 “tributes” aged between 12-18 are chosen and thrown into an arena where their brutal fight to the death is televised for the entertainment of the ruling city, The Capitol.

Ross (who is a fan) has kept the film very close to the books. There are few changes, but they’re forgivable, given the  movie needed to be just over two hours, not five.

It’s also obvious that the violence has been toned down, but it’s cleverly done and understandably necessary so tweens didn’t leave the cinema scarred for life.

Those that have read the books will definitely be at an advantage though, particularly understanding Katniss’ relationships with her mother, fellow tribute Peeta (Josh Hutcherson), and best friend Gale (Aussie Liam Hemsworth).

As the steely, arrow-firing Katniss, Jennifer Lawrence leads up an exceptional cast. Lawrence showed she could carry a movie with her Oscar-nominated breakout performance in Winter’s Bone and her similarly fearless portrayal of Katniss is perfect. 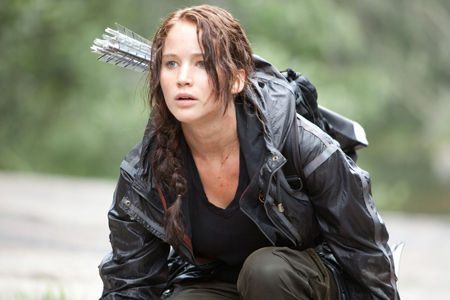 Her silent terror in the 30 seconds before entering the arena, with her designer Cinna (Lenny Kravitz) by her side, is particularly memorable.

Despite being considered by many as an odd casting choice, Kravitz makes quite an impression among a topnotch support cast including Elizabeth Banks (hilarious), Woody Harrelson, and Donald Sutherland, who brings a lot more to President Snow than the first book gave.

This isn’t just one for the fans though. Ross has cleverly used exuberant chat-show host Caesar Flickerman (Stanley Tucci: perfectly cast) to provide a running commentary on the games, which is helpful to newbies, while still being funny.

There’s some noteworthy special effects, particularly the filmmaker’s sleek vision of The Capitol. At times, Ross interestingly deviates from the book to show how The Capitol runs the games, by herding players into battle with fires and letting loose various chilling terrors.

No matter what critics say, The Hunger Games is going to be a box office success, but what’s nice, is that it’s truly deserving of it and a film adaptation that will delight fans, yet still be enjoyable for any newcomers.

Kieran Read to captain new-look All Blacks side against Italy