As if that wasn’t enough, Kerr has decided to go one better and show that it’s not just about posture, but that you can really easily accessorise a silly stance with an even more randomly bizarre voice, as she demonstrates in the ad (video below) in which she sings the theme tune for the drink. Take that Jolie! 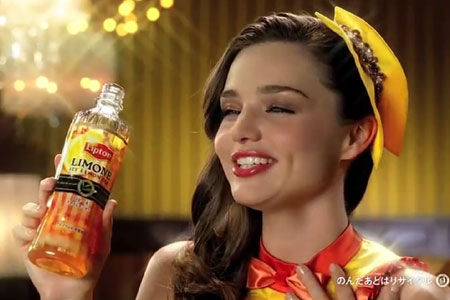 In the advert, which Miranda Shot last month when she flew out to Japan to be an ambassador for the drinks brand, Kerr sings the theme tune while posing in a skimpy yellow mini-dress as a hooded man brings her a bottle of the drink and other men in the bar in which she is stood watch on.