Aussie Wilson also won a couple of awards, breakthrough performance and best musical moment for Pitch Perfect, along with the attention on her serious speech about positive body image being stolen by a dress that couldn’t bring itself to deprive showbiz’s elite of her twin nipples. 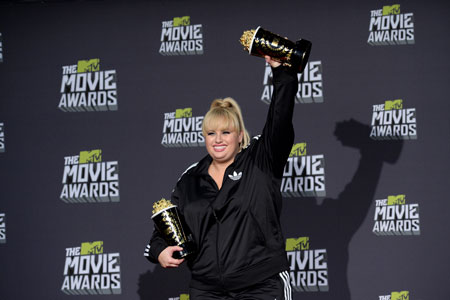 She opened the show, as is customary, with a musical performance, a raunchy mash-up of Eminem’s Lose Yourself, Macklemore’s Thrift Shop and Alicia Keys’ Girl On Fire.

After, she said: ” A special shout-out to Lil’ Kim, hopefully he doesn’t see me up on stage being all hot and prematurely fire his missile.”

Before the show started, James Franco, whose Oscars effort was lambasted, gave her some advice. “Hosting is a blast. You are not gonna regret it for a second … Trust me, nobody will ever say anything bad about you. It’ll be totally fun, cool, yes.” 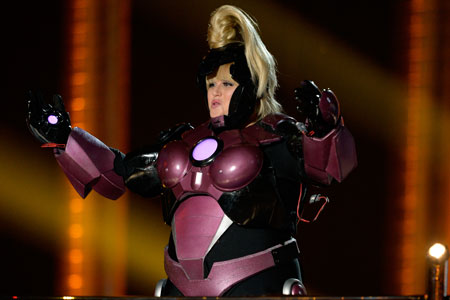 Then she got in an Iron Man suit, dubbed Iron Man-gina, to be transported to the stage.

She joked: “I’m a bit surprised that they asked me to host — and so is MTV. They thought I was Adele.”

The Round Up: review and trailer