Baumgartner leapt from a height of 39km above the New Mexico desert yesterday, freefalling towards earth in a pressurized suit, reaching speeds of up to 833.9mph, before opening his parachute and landing east of Roswell after just short of a ten minute descent.

“Let me tell you, when I was standing there on top of the world, you become so humble. You don’t think about breaking records anymore, you don’t think about gaining scientific data – the only thing you want to do is come back alive,” Baumgartner said after he safely returned to earth. 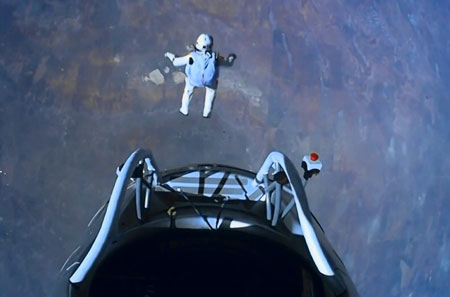 The attempt at breaking the world records had been postponed several times last week due to high winds and there were fears that his dive would be postponed once more after he reported problems with his visor heating equipment on the two hour ascent.

After he spoke with his mentor Joe Kittinger, though, who had set the previous freefall record in 1960 and was in mission control at Roswell airport, Baumgartner was back on track and made his leap into the history books.

His dive though was not without incident as it could be clearly seen that Baumgartner was spinning somewhat erratically during the early stages of the dive, but the 43-year old veteran of more than 2,500 base jumps and skydives managed to regain composure and get his dive back under control.

Ricki-Lee on her new album and living without fear