The ad for Baker’s Complete dog food features noises and whistles designed to attract the attention of hounds the nation over and will be broadcast in the UK for the first time today.

As well as including bells ringing and barks the ad features high-pitched noises and whistles which are inaudible to humans – similar in effect to a dog whistle used by dog-trainers and shepherds.

The noises are designed to make dogs pay attention and the ad may cause some frustration to owners whose pets could well start barking and jumping up at the television set.

The ad was tested by the Bakers pet food company with real dogs who were given the distraction of a toy to play with. They found that all twelve of the animals in the trial showed an interest in the noises coming from the screen and several approached the TV to investigate further.

The ad shows a gang of dogs of assorted breeds hijacking a dog food van as it makes deliveries and is a tribute to the classic 1969 British film The Italian Job, starring Michael Caine. The dogs end up in a sticky situation after a speedy escape along cliff top roads, skidding then teetering off a precipice. 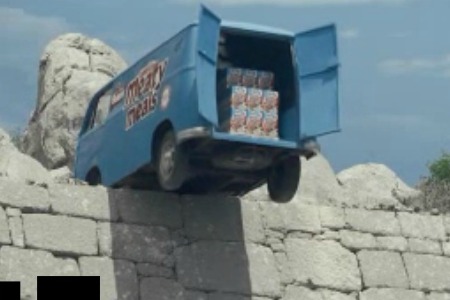 “High-pitched frequencies cannot be heard by the vast majority of humans. But they appeal to dogs as their hearing is twice as sharp. Our experts have created an advert interspersed with high frequency noises that only canines should hear.” said Baker’s resident animal expert Zara Boland.

The ad comes with an on-screen message saying ‘This advert contains special sound effects for your pet’. So, if canine companion suddenly becomes very interested in the television today, you’ll know why.

See all the action, bells and whistles in the video below.

Cannabis, crossbow and a crocodile seized by police drug raid on Tasmanian house