Visit Dubai on a budget and see behind the stereotypes

Dubai: admittedly not the most obvious budget destination. Best known as the go-to spot for perma-tanned WAGs and the ‘nouveau riche’, its very reputation (or lack of) is built on a predilection for big buildings and bling. But exploring the opulent desert city on a shoestring is in fact the finest – or perhaps even the only – way to see the culture beyond the clichés.

“But Dubai has no culture.” I’ve lost count of how many times I’ve heard this phrase. No doubt a product of too much time spent in its soulless shopping malls and hotel bars, it’s true Dubai can come off a bit sterile. The city’s garish gimmicks – diving with sharks in shopping malls, world’s biggests and tallests, a ‘seven-star’ hotel – are fun but ultimately shallow. But slash the budget and you’ll be forced to dig a little deeper.

By doing just that, I find I have never encountered such a diverse cultural melting pot as the one overflowing in Dubai – and this coming from someone who intimately knows both London and New York. Perhaps the greatest indicator of this is Dubai’s budget food scene – a grossly overlooked treasure trove of culinary treats. 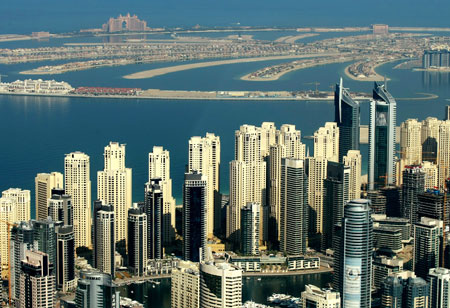 While the likes of Gordon Ramsay, Jamie Oliver, Gary Rhodes and Nobu Matsuhisa happily charge a few-hundred-quid-a-head in their Dubai eateries – and even fashion icons Georgio Armani and Roberto Cavalli have chosen here to launch fine-dining affairs – I discover the real top tables are found in its tucked-away neighbourhoods.

Walking down the bustling, neon-soaked streets of Deira, a largely Indian area near Dubai Creek, I duck inside Al Bayt Al Baghdadi. Among a strip of restaurants on Al Muteena Street, its simple canteen-like set-up includes a huge cauldron. Fresh fish is cooked over coals the traditional Iraqi way. Served with a mezze of Arabic sides, a feast fit for four sets you back no more than £5 each.

Similarly, if you wander as I did to the Umm Suqeim Fishing Village – not 10 minutes from the infamous seven-star Burj al Arab – you’ll find a cabin bearing the neon sign Bu Qtair. A cross-section of Dubai’s expat communities – Indians, Filipinos, Aussies and Brits – clamour to order fish caught that day, bathed in Indian spices and paired with rotis. A particularly quirky touch is that the staff bring out my table with my food (the cramped cabin makes the experience necessarily al-fresco). I spend no more than a couple of quid.

Another unexplored ‘hood’ is International City, where a largely Pakistani, Afghani, Filipino and Chinese population dwell. Divided into 10 clusters of apartment blocks, each is named after a country, and bears architecture reflecting that theme. On the outskirts of the city, it is a million miles from the polished villas of inner Dubai – a friend describes it as equivalent to ‘the projects’ in the US. This is low-income housing Dubai-style: still gimmicky, but not quite so plush.

The China cluster boasts the decidedly offbeat Buhaiwan Chinese restaurant. Its shabby mauve décor has seen better days, and my Mandarin-speaking companion has to do all the ordering because no one speaks English. However, there are lots of smiles, and the food – an obscure cuisine from the Uyghurs, a Turk ethnic group that has primarily settled in the Xinjiang Uyghur Autonomous Region (western China, bordering Kazakhstan and Kyrgyzstan) – is like nothing I’ve ever tasted before. Strange concoctions involving kebab meat, potatoes, seaweed and lots of chilli are surprisingly tasty, and set my tongue a-tingling. I spend about £4 on two huge dishes.

But perhaps the most sublime foodie finds are in independent Indian restaurants, most of which are spread throughout Dubai’s working-class Karama and Satwa. More than half of Dubai’s population is Indian, producing a plethora of authentic cuisine from all over the sub-continent. If you think London does a good curry, let Dubai serve you some better ones.

Probably my favourite discovery is the thalis at Madras Vegetarian Restaurant in Mankhool Road, near Satwa roundabout. The sweet staff are elated to see a couple of tourists come in, and set about showing us how to eat with our hands. Luckily, we’ve stumbled in on a Friday, when an all-you-can-eat supply of curries, chutneys, poppadoms and rice is served up on a giant banana leaf for – I kid you not – £2.

Satwa is also a great spot for shopping. Sure, you could head to Dubai Mall, with its shark-filled aquarium and Olympic-sized ice skating rink, or even Mall of the Emirates, home to a ski slope and Harvey Nichols. But pounding the dusty pavements of Satwa, I dig out all manner of glorious tat. A pink, plastic mosque-shaped alarm clock that sounds the call to prayer is the highlight of my haul. You can also get clothes tailored here; my travel companion has her Topshop dress copied into three different colours for £40, including material.

Even a night out on the town gets me talking to folk from all over the world. Starting at the infamous Tuesday night pub quiz in Fibber Magee’s in Sheikh Zayed Road, I find where the Irish, Aussies, Kiwis and Brits come for a taste of home. As well as battling it out over rounds including Plasticine-modelling, I get four free white spirits on entry by virtue of being a woman – now that’s a result. 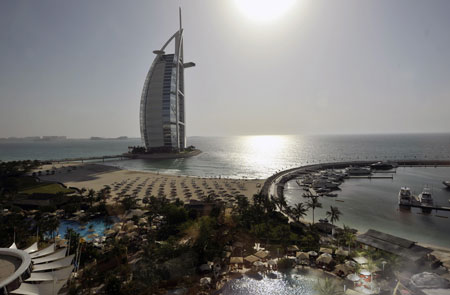 It seems Tuesday is ‘ladies’ night’ in Dubai, because I’m then dragged off to Boudoir – a posy club in the Dubai Marine Resort & Spa – under the promise of free-flowing bubbly. Draped in velvet and dripping with shimmering chandeliers, any other night in this elite spot would do your purse some serious damage.

But, tonight, champagne is on the house for the girls, and I dance the night away with Emirates airline staff from every corner of the globe. I get chatting to air stewards Billy, who is Lebanese, and Fadi, a Palestinian. Billy assures me that Dubai is “the best place on Earth”. If Fadi wasn’t so busy cutting some rug, I’m sure he’d agree. As fun as I’m finding all this mega-cheap eating and drinking, I realise there’s one element of Dubai’s cultural fusion I haven’t explored: the locals (just 17 per cent of Dubai’s population are UAE nationals).

This is easily solved with a visit to the Sheikh Mohammed Centre for Cultural Understanding, located in a traditional house by the Creek. The centre’s mantra is ‘open doors, open minds’, reflecting its aim to remove the mysteries surrounding Middle Eastern culture and Islam. I book in for the cultural breakfast – held every Monday and Wednesday – during which you can ask your Emirati host anything you like about the culture, while feasting on a spread of traditional fare.

Alongside the learning, it’s a unique opportunity to sample the local cuisine as there are no restaurants serving it in Dubai. (One restaurant, Local House in Bastakiya, claims to do so, but I’m unconvinced by the menu’s inclusion of camel burgers and camel curry.) 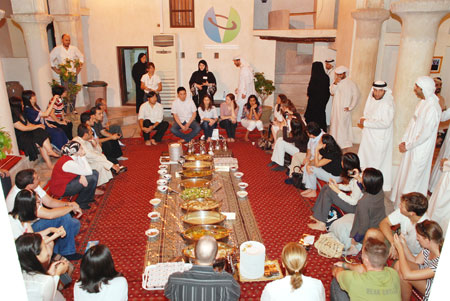 About 15 of us collect in the centre’s shady courtyard, kept cool by its distinctive wind towers – or ancient air-conditioning. Our female host answers questions about Islamic dress and women’s rights, frankly and good-humouredly. When quizzed about the fact that she has to obtain permission from her husband to leave the emirate, she says: “You wouldn’t go off somewhere without leaving your husband a note to say where you’re going – it’s the same.”

Having filled up on luqeymat – sweet doughnut-like balls dipped in date syrup – I walk off breakfast by the Creek, which glitters unabashedly in the afternoon sun. You can pay about £40 for a dinner cruise down the Creek, but I elect to spend 17p on an abra ride to the other side. Stepping into these little motor-powered boats is always an adventure, as they speed erratically among much larger dhows (wooden Arab sailing vessels). Squashed between men dressed in the Shalwar Qameez, I can hardly believe I am in the decadent desert city right now.

This feeling is only enhanced by a walk along the wharfage once I reach the other side. Here, hot, sweaty sailors load their dhows with goods ranging from food to refrigerators. Tonight, they’ll begin the journey all the way to India. It all seems impossibly exotic, despite the glass-fronted Rolex towers glinting at me nearby.

A dearth of culture is not something the Dubai-bashers have got right. But there is one thing that vistors have nailed – gaining the infamous ‘Dubai stone’. I might have saved a pile of cash doing Dubai on a budget, but considering all the amazing food I’ve been scoffing, it’s all going towards a gym membership when I get home. 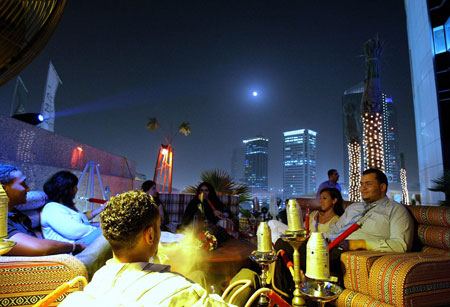 GETTING THERE:  Fly direct from London to Dubai with Virgin from £437 return (virgin-atlantic.com). Indirect flights with Oman Air start at £345 return (omanair.com). Indirect flights with Qatar start at £394 return (qatarairways.com).
WHEN TO GO: October-April is about perfect, with guaranteed sunshine, temperatures ranging between 20°C and 30°C, and little to no humidity.
CURRENCY: £1 = AED5.8
ACCOMMODATION: Dubai Youth Hostel boasts great facilities including pool, gym, and sauna. Rooms start at £29pp, but note it is pretty far from the rest of the city (uaeyha.com). Rooms at the Holiday Inn Express in central Jumeirah start at £40pp a night (holidayinn.com). Avoid the 2-3 star hotels around Bur Dubai and Deira: they’re infested with bed bugs.
SEE: dubaitourism.ae