One day when you’re rich and famous, holidays will never be shorter than a month. But until that time comes, don’t let a lack of time stand in the way of discovering Europe’s iconic cities. Madrid, Spain’s stylish, exciting capital, stays up all night. Which is just as well, because you will be too. Sleep at your desk on Monday.

Wake up in your hotel and feel excited. You’re in Spain’s capital, a city founded by Arabs in the IX Century that is now one of Europe’s buzziest centres. In its time, Madrid has been the seat of resistance against French occupation and seen the beginning of the Spanish war of Independence. 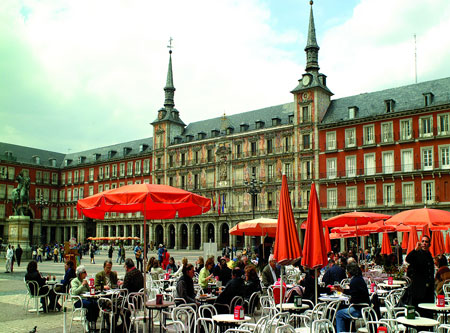 Get your skates on; it’s time to see where you are. The Puerta del Sol is the centre of Madrid and it’ll be bustling with tourists but walk through and take a picture of the famous statue of a bear eating a madrone tree, the heraldic symbol of Madrid.

The Royal Palace of Madrid is still used by the Spanish royal family on state occasions but most of the time the doors to at least some of its nearly 3,000 rooms are open to the masses. Have a look at the mind-blowing opulence inside and try not to compare it to your flat in Bow.

Historic Plaza Major is spectacular but don’t eat or drink here unless you’re happy to be ripped off. Do, however, feel impressed by its European grandeur and look up at the 1992 ‘angels and saints’ mural decorating one of the buildings.

Rubbish hotel opens in Madrid
BOOK A TOUR OF SPAIN

There are lots of tapas bars, so try something different in each. In many bars in Madrid, you’ll be given a free plate of tapas with each drink you buy. 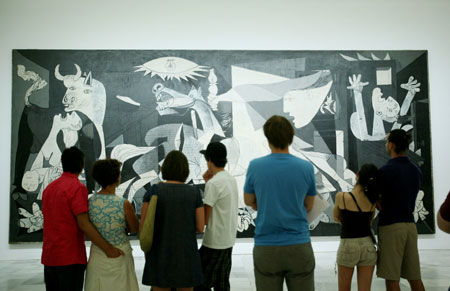 El Prado will blow your mind and you’re not really doing the world’s largest art gallery justice with a short visit, so be specific about what you want to see. Don’t miss the terrifying darkness of Goya’s Black Period paintings with his fearsome Colossus and Saturn Devouring His Son.

The museum houses a collection of art built up over two centuries and other greats include El Greco, Velázquez, Raphael and Bosch.

You can’t leave Madrid without seeing Picasso’s famous Guernica at the Reina Sofía Museum. The huge painting depicts the bombing of Guernica during the Spanish Civil War and is full of references to bullfighting and violence. 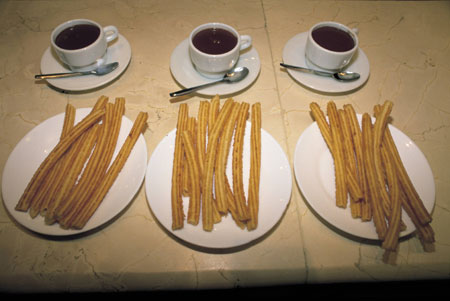 It’s time for chocolate. Hot chocolate is taken seriously in Spain and the Chocolatería San Ginés near the Puerta del Sol is open until the small hours when spaced-out clubbers stop in for a sugar fix. Order a cup of thick, rich hot chocolate with a plate of churros to dip. Cocoa nirvana.

There’s time for shopping as Madrileños don’t have dinner until late. Central Madrid is good for big department stores with familiar names such as Mango and Zara. For trendier boutiques head to Calle Fuencarral and Hortaleza, near Gran Via.

Madrid has it going on every night of the week and people party til the morning. Have a leisurely dinner before you start boozing as bars won’t get busy before 11pm and clubs are dead until 2am.
Chueca is Madrid’s gay district and has risen from its former junkie-ridden squalor to become a wild, hip nightlife haven.

Nearby Malasaña is chilled out, boho and a good place to do some bar-hopping. Drinking on the street is the norm, especially in the summer, and there’s a warren of bars to explore. Now shame on you if you’re home before dawn! 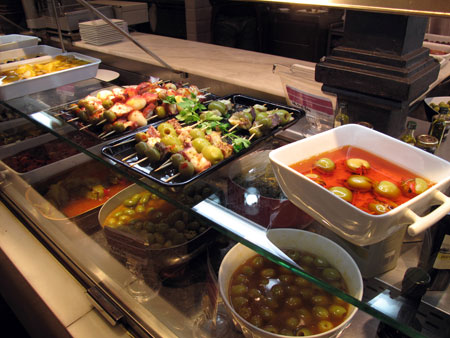 WHEN TO GO: Anytime.
GETTING THERE: Air Europa flies direct to Madrid from £48.50 (aireuropa.com), as does Ryanair, easyJet, Iberia and BA. There are also good train connections with other Spanish cities.
GETTING AROUND: Walk or use the very comprehensive Metro system.
VISAS: South Africans need a Schengen visa.
CURRENCY: Euro. 1 GBP = 1.18 EUR.
LANGUAGE: Spanish.
GOING OUT: A beer costs from €2.
ACCOMMODATION: Dorm beds from €13. Hotel rooms from about €30.
GET MORE INFO: turismomadrid.es.

Work promotions more likely for those who holiday abroad annually