The pictures feature the model covered in oil, lying prone on oil-covered rocks or tangled in fishing net in an oily sea. In one of Vogue’s pictures, McMenamy chokes as she coughs up oil. 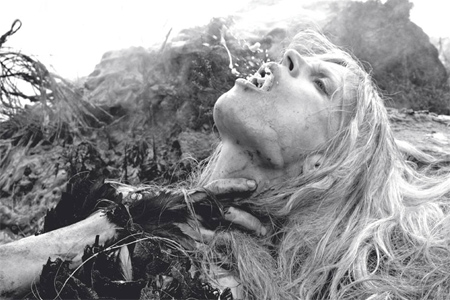 The shoot is titled ‘Water and Oil’ and was shot by fashion photography maestro Steven Meisel. However, using the BP oil spill as a fashion opportunity hasn’t gone down too well with everyone and some feel it mocks and trivialises the disaster.

Italian Vogue’s Editor-in-Chief Franca Sozzani has defended the oil shoot, telling the Associated Press: “There is nothing political. There is nothing social. It’s only visual. We gave a message but in a visual way just to take more care about nature.” 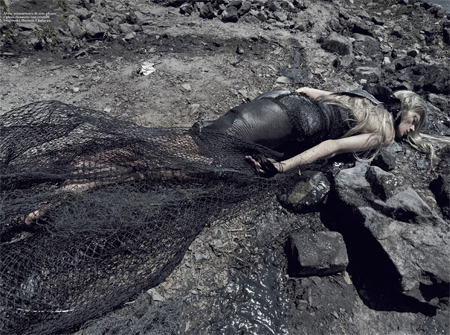 And here’s what others in the fashion world are saying about Vogue’s oil spill photo shoot:

“While the irony of using clothing worth thousands of dollars that was
probably flown halfway around the world for the shoot is not lost on
us, we can’t help but think that if this isn’t art, we don’t know what
is.” – Styleite

“Glamorizing this recent ecological and social disaster for the sake of “fashion” reduces the tragic event to nothing more than attention-grabbing newsstand fodder.” – Refinery29

“I felt that they used the oil spill as a backdrop. There was one picture that had feathers. What makes a stronger statement about oil-slicked birds is an oil-slicked bird.” – Jezebel

“For fashion Meisel’s photos don’t give you much to take away, but as art the imagery is poignant and intense. And we like to occasionally be reminded that it’s possible for fashion photography to be so.” – Fashionising

“Who does this make you loathe more, BP or the fashion industry?” – Fast Company

“It’s at once beautiful and revolting, eye-catching and alienating. So what is it: ballsy fashion journalism rooted in reality, or just a sick glamorization of a traumatic event?” – New York magazine’s The Cut

Whatever people’s opinions, we’re sure Vogue’s sales have gone through the roof this month… 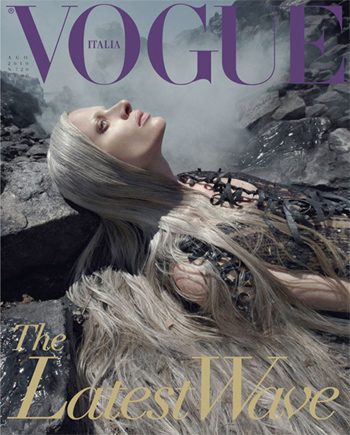 Glastonbury 2012 cancelled due to Olympics

Asleep at the wheel: Woman drives over 300 kilometres, sends text messages in her sleep