09:00  Drop your bags at Villa Guesthouse (230 Soi 1, Thanon Samsen, Banglamphu, tel. 02281 7009). Set a few streets back from Khao San Road, it’s cheaper than the grotty hostels around the famous backpacker haunt, and a lot nicer, too – the traditional teak house is basic, but comfy, and there’s also a sunny, plant-filled courtyard at your disposal. From £7pn, with shared bathrooms.

10:00  Bangkok may be a famous party city, but it boasts more than its fair share of culture. Start the day by checking out Bangkok’s wats, or Buddhist temples. Probably the most visited is Wat Phra Kaew (Na Phralan, Phra Nakorn Old City, admission £7). This compound boasts intricately decorated temples, giant gold stupas, and the Emerald Buddha – Thailand’s most holy image. You can also see the former royal residence, the Grand Palace, which lives up to its name. 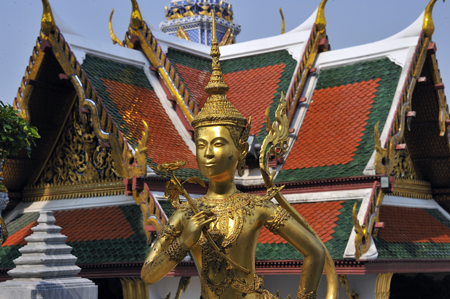 12:00  A short walk from here is Wat Pho (Th Sanam Chai, admission £1). Most impressive is the Reclining Buddha,
a huge gold-leaf statue meant to represent Buddha passing into nirvana. Check out the soles of the statue’s feet, on which there are illustrations rendered in mother of pearl, then try fitting the 46m-long, 15m-high creation into
one photograph.

14:00  Then head over the river to Wat Arun (Th Arun Amarin, admission £1), which cuts a majestic figure on the bank. A ferry from Tha Tien to the temple costs about 7p. Most impressive is the wat’s 82m-high tower.

16:00  If you’ve got any more sightseeing left in you, we can highly recommend a trip to Jim Thompson’s House (6 Soi Kasem San 2, Th Phra Ram I, admission £2). The US entrepreneur – founder of the renowned Jim Thompson Thai Silk Company – fused a number of Thai teak houses together to create an impressive complex, and it makes for a fascinating, quirky tour. 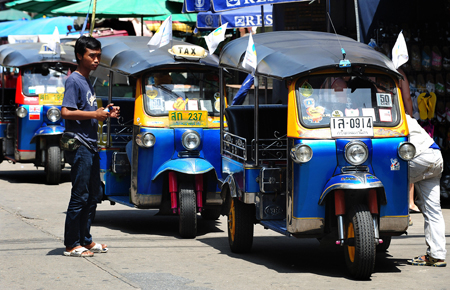 18:00  For Bangkok’s most entertaining evening meal, head to The Flying Chicken (99/1 Bangna Trad, Bangna – opposite Royal Dragon and BITEC – tel. 02399 5252). Order the eponymous signature dish, and it will – we shit you not – be catapulted into the air, then caught on a spike attached to a helmet worn by a waiter riding a unicycle. You’ll even get chance to try to catch the chicken yourself. The unexpected bonus is that the food is actually good.

20:00  Continue the evening’s excitement at the Lumphini Stadium (Th Phra Ram IV Lumphini, tel. 02251 4303), where you can see some seriously brutal Muay Thai bouts. Arrive a few rounds in and you’ll probably snag a ringside seat at a cut price (about £30) – doubly awesome as you get a great view and beers brought to your seat.

22:00  It wouldn’t be a night out in Bangkok without a ping-pong show. Taxi over to the Patpong area and, wherever you end up, make sure there’s a cover charge – anywhere that doesn’t ask for one is scamming you, and will bring over an astronomical bill at the end of the night. Also, don’t listen to the tuk-tuk drivers who offer to take you to a cheaper show outside of Patpong – you can expect to end up somewhere particularly unsavoury.

00:00  The night needn’t end here. Finish up on Khao San Road, where the rowdy strip of backpacker bars parties on until dawn. Then it’s just a short walk home to Villa Guesthouse.

13:00  Take your hangover to sparkling shopping mall Siam Paragon (siamparagon.co.th), where the food court offers up an overwhelming array of treats – try the Chiang Mai sausage for the strange sensation of a banger that tastes like Thailand. The air conditioning should help the alcohol sweats.

15:00  Feeling refreshed? Then dive into Chatuchak Weekend Market (Th Kamphaeng Phet 3), where more than 5000 stalls will be vying for your attention. Everything and anything is for sale, from clothes and trinkets, to live snakes. 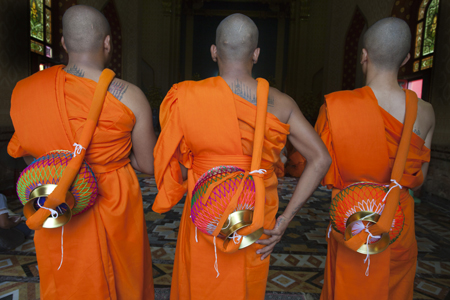 18:00  The best food you’ll eat in Thailand will be bought from street stalls, where curries, pad thais and everything in between are best enjoyed with an ice-cold Thai coffee. But if you fancy splashing out on your last night, the most spectacular place to KO the wallet is Sirocco. The world’s highest al-fresco restaurant gives a breathtaking vista of the city, set on the 63rd floor of the Dome at Lebua (lebua.com). Expect a five-star price tag.

21:00  End your weekend at Coyote (coyotebangkok.com), where there are more than 75 types of margarita to choose from. Also serves some of the most mouth-blistering hot sauces on the planet. Can you think of a better way to end a weekend of debauchery in Bangkok?

Flying from Bangkok to London: Flights from London Heathrow to Bangkok, via Muscat, start from £480 return with Oman Air  omanair.com

Amy Childs in Vogue and in bed with Lucien Laviscount