Ouch, 381 runs. That hurt. Revenge it seems, despite the popular adage, is a dish best served in the broiling heat and high humidity of a Queensland summer’s day (or, four, as the case may be).

For an Australian sporting public so long deprived of the sweet taste of success against the old foe, the 1st Ashes Test at the Gabba was a moment of pure, uninhibited ecstasy. You could smell the blood in the water from a mile away and the Aussies circled (the players around the bat, the fans around the bar), like ravenous sharks.

Mitchell Johnson particularly, looked reborn: his ridiculous handle-bar moustache bristling fearsomely as he charged in from the boundary and delivered a barrage of short-pitched, lightning bolts at the chests, heads and arms of England’s seemingly hapless batsman. It was carnage.

If Alistair Cook didn’t realise before, this Ashes series looks to be a very different kettle of fish than the last few that he and his team have cantered through.

Still, one Test does not a series make. England remain the better side on paper (even with the withdrawal of batsman Jonathon Trott), but this time Michael Clarke’s Aussies look angrier and hungrier than before and, more importantly, seem willing to do whatever it takes to win. 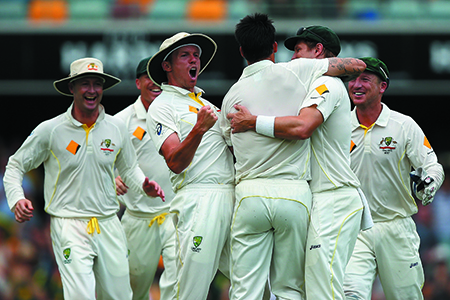 Short, but a long way from sweet

At the height (or nadir, depending on which side you were supporting) of the English first innings, where six wickets fell for just nine runs, one dissenting voice stood out amongst the multitudes gushing vociferous praise for the Aussie’s rampant spell.

Jonathon Agnew – the former English cricketer turned pundit with the ABC Grandstand team – asked a poignant question which fell, mostly, on deaf ears. “Isn’t there more to the game of cricket,’ he asked. ‘Than just this ‘winning-at-all-costs mentality’, or am I just showing my age, here?”

Agnew’s question was in response to having witnessed Australia’s battery of fast men; led by Johnson, launch a sustained, brutal and premeditated torrent of bouncers at England’s tail-enders.

Agnew was not arguing that the tactic hadn’t been successful (that was not something that was up for debate) but was asking whether it was really in keeping with cricket’s image as a gentleman’s sport? Almost certainly it wasn’t, but it was fun to watch.

Papering over the cracks

Australia’s batting lineup, particularly its top order, still needs a huge amount of work. Of Australia’s top six batsman, only David Warner made scores in both innings (49 and 124) and, were it not for Michael Clarke’s second innings century, the result of the match would not have been such a foregone conclusion.

Chris Rogers was, and this is being generous, ‘stodgy’ at the top of the innings, while Shane Watson seemed to do what he does best – get himself set, play a few lovely drives and then get out playing a silly shot. Test debutant George Bailey, meanwhile, looked all at sea in both innings. It remains unclear whether he’s the long-term solution to Australia’s woes in the number six spot.

And, Steve Smith? When you consider the sorts of players who have batted at number five for Australia in the last 10 years – Steve Waugh, Damien Martyn, Michael Hussey and Michael Clarke – well, it’s probably fair to say this current Australian side seem a long way from being in a second ‘golden age’.

It was the Australian bowling unit who won the 1st Test, but it won’t be so easy as the series goes on. Adelaide – although a lot has been made of the new, drop-in pitch – is historically known as a batsman’s paradise, while the MCG and, to a slightly lesser extent, the SCG have both produced big first innings totals in recent memory. Failing to score over 350 in the first innings won’t be punished so lightly in the future.

Swann in a spin

A lot of England’s recent Test success can be put, in a large part anyway, at the door of Graeme Swann. The off-spinner has had the very happy knack of being able to pick up a wicket or two when his side has needed them from him most – on flat tracks, where there hasn’t been much joy for the quick bowlers.

But Swanny went missing in action in Brisbane – he finished with match figured of 2/215 – and the English side suffered badly because of it. Having bludgeoned Swann out of the attack they then set upon England’s weak third seamer and were able to score at over four runs an over in the second innings.

Barmy Army fans may well point to the Gabba being a historically unkind venue to all finger spinners yet, Australia’s own tweaker Nathan Lyon, was able to pick up four key wickets for his side – two in each innings – which kept the momentum going for the Australians.

Graeme Swann will bounce back from his Gabba drubbing – he’s too good a bowler not to – but that will certainly have had an affect on both his mental and physical well-being going into the 2nd Test. 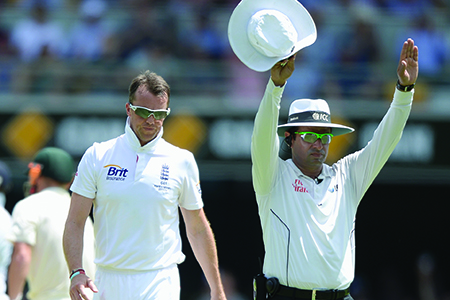 Despite the vehement protestations of some of Australia’s most uninformed cricket fans, the stump microphone is not a listening device illicitly planted by the super villains at Channel 9 to spy on what the players are saying out in the middle. It’s predominantly there to help the various umpires hear thin nicks and edges. The fact that it picks up all of the ‘banter’ (or full-blown sledging, whichever you prefer) between the opposition is merely a happy byproduct.

Sure, if you wandered up to someone in the street, that you didn’t like very much and told them to “get ready for a broken fucking arm” (as Michael Clarke did to poor, old Jimmy Anderson at the Gabba) you’d probably find yourself in a spot of bother with the local constabulary.

However, Alistair Cooke himself declared that the 1st Test had been “a war” and, you know what they say about all things being fair in love and Ashes cricket, right?

Driver caught wanking on the M40

Who peeps at yer paps? This video cam has the answer