Whale watching in Sydney: Things to see and do in winter

What’s the best thing about Sydney? Hmm… it’s a tricky question for sure.

Whilst the Bridge and Opera House are up there, I think the magic of the city is harboured somewhere between the two. For me it’s the sea that makes Sydney special. And with whale watching season underway, the ocean should not be ignored during these chilly months. No siree.

After a manic long weekend filled with well… not enough water, it was the perfect time to jump on board a whale watching trip and clear the head with some sea air.

The gentle hum of the engine and complimentary tea and biscuits were enough to keep me happy for the time we spent hunting down the whales.

Our resident whale expert told us about the humpbacks we were looking for – they were big (40-50 feet), had a unique marking on the underside of their tail and really liked beans on toast…

I was listening, honest. It was just hard to fully concentrate when your eyes are busy turning waves into whales and back into waves again. 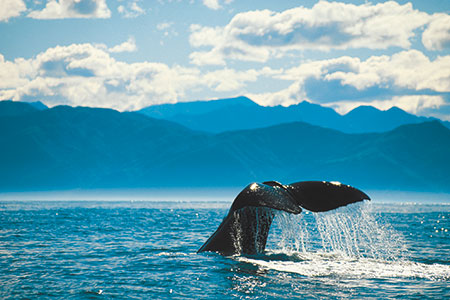 I needed a better view so I climbed up to the top deck to see if I could be the first to see a whale. “Over there, over there!” Some hussy had beaten me to it.

At 11 o’clock (the radar you use when you spy a hot person, not the actual time) was our first whale. And although we were whale watching, actually seeing a whale came as something of a surprise. Their size and beauty makes them seem like a fictional character who should be chilling out with the Little Mermaid rather than swimming in the Pacific Ocean.

A few minutes later and the sea was bubbling with a salubrious number of whales. Whilst most of them were migrating north (to the warm waters of Hervey Bay) in an orderly fashion, there were a few who were going mental and totally flipping out about the trip. The energy of these whales reminded me of watching gymnasts at the Olympic Games, but instead of hand-springs, the whales had their own routines. One whale breached, followed up with a head lunge and finished the act with a tale flap. Wowser! 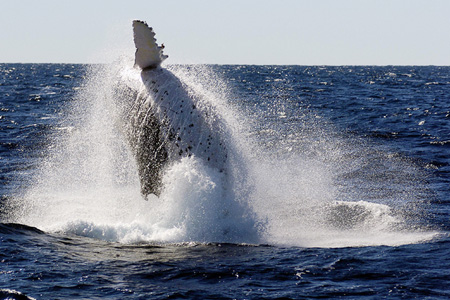 After such a display I wanted to hold up a scoring card to show my appreciation, but I didn’t… because I didn’t have one and it would have been weird. For those of you not down with whale lingo, a breach is when the whale lifts over two thirds of its body out of the water – it is a spectacular sight and something it manages with just two simple flicks of its tail.

Whilst finding whales was not difficult, what proved tricky was catching the rascals on camera. After taking 20,001 photos I was convinced I hadn’t shot anything but blue water. For such big lummoxes, they can sure move fast. It didn’t help that when I was finally gifted the perfect shot I took the photo with the lens cap on. What a doof.

In the end I decided to retire from my photography pursuits early (my hand had started to hurt) and headed down for some more biscuits and tea. Sitting in the warmth of the deck below I watched whales no more than 20 metres away continue their lively display. They knew we were watching them but thankfully they’d decided we were worth a bit of a flirt.

The damage & details: whales migrate up and down Australia’s east coast from late May to early December; trips with Whale Watching Sydney (Ph: 02 9583 1199, whalewatchingsydney.net) cost from $65 (if you don’t see a whale you can keep coming back till you do)