Third in the Sydney 500 behind Shane van Gisbergen and Jason Bright after some hairy moments was enough to clinch the honour.

Whincup, 30, was going for the win after starting in third. He could have just cruised around and not gone near trouble, but it’s not in his make-up.

The champ had earlier in the weekend got his 75th career win Saturday’s opening race.

“Of course the numbers are massive, I must admit,” Whincup said. “My main motivation this year was that there was a lot of the talk that our car was better than everyone else’s last year. This year, everyone has pretty much exactly the same gear and it came down to that human element of digging deep on the day.” 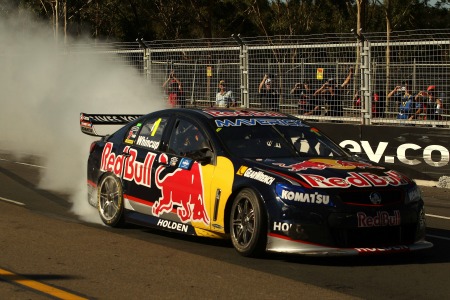 “I had the championship in the back of my head, but I just couldn’t help but race. I did think of the team [after clashing with Jason Bright]… I thought this is probably the best scenario but at the same time I thought of all the people who paid 100 bucks each to get in the gates.”

Whincup was brought into Red Bull in 2005 as a young understudy to Craig Lowndes, but he’s “a standout driver of the era”, says his boss Roland Dane.

“When you take a gamble on somebody at a young age, there’s nothing more gratifying than to see them deliver,” Dane said.

Lowdnes finished second in the championship, the closest ever in V8s.

“We pushed him all the way,” Lowndes said. “Congratulations to Jamie, he deserves it. He’s been fast all weekend and fast all year, it’s a credit to the team.”