“As I transition into this next phase of my life, I want everyone to know  the real me. I am Chelsea Manning. I am a female,” Manning said in a statement obtained by the Today show as lawyer David Coombs made an appearance on US breakfast news.

“Given the way that I feel, and have felt since childhood, I want to begin hormone therapy as soon as possible. 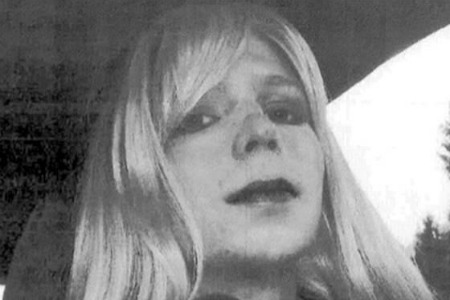 Bradley will now be known as Chelsea Manning

“I hope that you will support me in this transition. I also request that, starting today, you refer to me by my new name and use the feminine pronoun (except in official mail to the confinement facility).

“I look forward to receiving letters from supporters and having the opportunity to write back.”

Mannings struggle with gender identity came to light during his sentencing hearing. He said in an email to his supervisor in 2010:  “This is my problem. I’ve had signs of it for a very long time. It’s caused problems within my family. I thought a career in the military would get rid of it.”

“I don’t know about the sex reassignment surgery… Chelsea hasn’t indicated that that would be her desire, but as far as the hormone therapy, yes,” Manning’s lawyer David Coombs said during the interview with Today.

“I’m hoping [military prison] Fort Leavenworth would do the right thing and provide that…I think the ultimate goal is to be comfortable in her skin and to be the person that she’s never had the opportunity to be.”

The 25-year-old was sentenced on Wednesday to 35 years in a military prison after supplying Wikileaks with classified US government military files, saying in an open letter he intends to send to President Obama that he had leaked the information “out of concern for my country and for the world that we live in”.

It has been claimed that Manning could potentially be released on parole in seven years.

London secret club: Night Moves – We Are One – a deep house and techno night at a secret location