Winners and Grinners: The best of Queensland for the Golden Backpack Awards

Voting is now open for TNT Magazine’s annual Golden Backpack Awards – the only independent travel awards in Australia and New Zealand which are voted for by you, the backpacker. You will only have until the 29th of September to vote and the winners will be announced at a swanky ceremony on November 8th.

Some of last year’s awesome winners include: Oz Experience who won our National best tour operator, Jucy Rentals who won best car/campervan rental and Greyhound Australia who won best national transport company. For a full list of last year’s winners click here and go to our website to cast you own vote and have your say on 2013s Golden Backpacks!

To help you cast your vote, we will be looking at some of the best destinations, activities and cultural experiences that this wonderful country of ours has to offer. So, without further ado we give you the great state of Queensland. 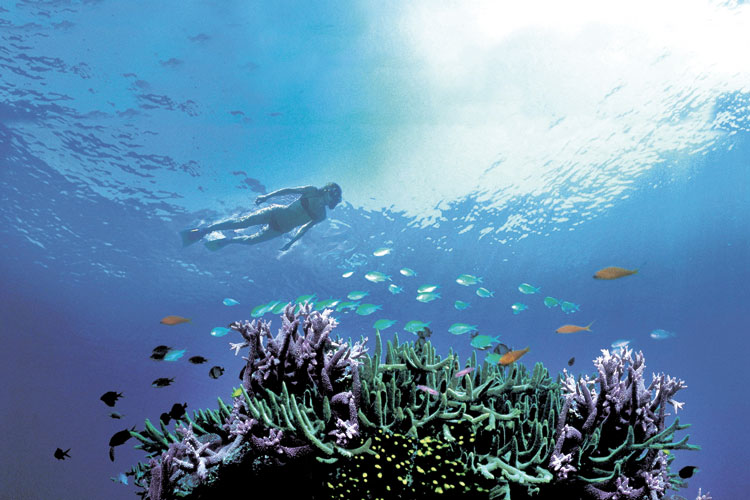 Another world lurks beneath that glorious turquoise ocean that laps Queensland’s beaches. Stretching for 2,000km, there’s plenty of opportunities to get down there and have a look.

Well, you could break the ice on the Manchester Ship Canal to study the mating habits of shopping trolleys, but wouldn’t you rather learn to dive in the warm waters surrounding the world’s largest reef system?

The Daintree, north of Cairns, is the largest stretch of virgin rainforest in Oz. Lush, green and beautiful, a visit will make you feel like Mowgli in the Jungle Book – without the loincloth. Hopefully. Further up, in Cape Tribulation you can walk out of the glorious green onto white powder beaches. Heavenly. Head even further up, to Cape York, for what must be one of Australia’s greatest roadtrip.

When you’ve found out that there’s not much more going on in Cairns than pole dancing and wet T-shirt contests, head a few clicks north to Port Douglas. Cycle around, catch some fish or rent a small boat.

Is the best thing ever – it’s official. It makes you feel invincible, scares the living shit out of you and, in Queensland, offers incredible views in the process. What’s not to like? Take the tandem challenge on Mission Beach.

Officially the second best thing ever. The AJ Hackett site near Cairns is one of the only places in Oz where you can bungy. It’s also very pretty.

Take a stroll on Magnetic Island or drop intoBrisbane’s Lone Pine Koala Santuary and you’ll spy some of these cute mini-ewoks. Photo-op heaven. 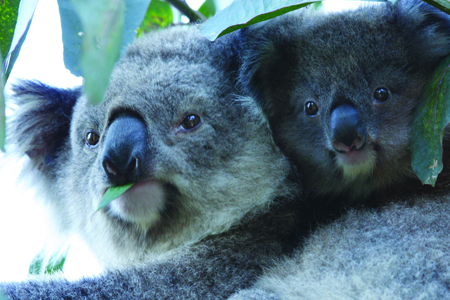 White-water rafting is a knuckle-whitening ride that’s all for real. The Tully River, accessed from Mission Beach and Cairns, is the most popular place to get wet.

The Laura Festival, held in the small Cape Yorktownship every July, is a unique opportunity to learn about the local Aboriginal culture through dance, song and art.

Southern Queensland is, in more ways than one, Surfer’s Paradise. The reef puts a stop to the waves at Bundaberg, but until then, learning to surf is the most fun you can have with (some of) your clothes on.

The worst haircut that ever raised its tufty spikes still lives large in Qld. The comedy value is priceless.

Become a yachtie, if only for a few days. With this much coastline, Queenslanders love a boat. Yachties, by the way, are often very cute, with suntans and good arms. Just a tip, ladies…

Okay, Steve isn’t there anymore, but there are more idiots that risk their lives by cuddling crocs. Check out the shrine to all things Irwin that is the Sunshine Coast’s Australia Zoo.

Soaking up the rays 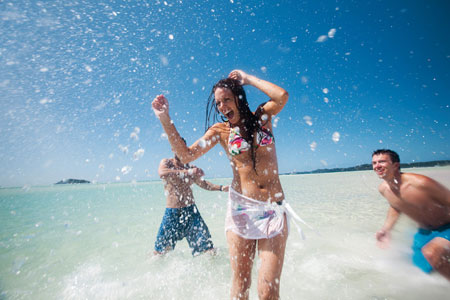 A perennial fave, nothing quite beats burning up the beach of the world’s largest sand island in a 4WD. The inland lakes are also some of the best swimming spots you’re likely to find in Oz.

The Simpson Desert is one of the largest national parks in Australia and looks like something from Star Wars, all rolling sand dunes and salt pans. It’s also the world’s only desert named after an irreverant cartoon family.

Bundaberg Rum. When in the town, order a ‘dark and stormy’ – Bundy rum and ginger beer.

Swimming in croc-free fresh water on a hot day is as close to heaven as most of us are likely to get. The Atherton Tablelands does them best.

Pretend to be a farmer for a few days. Ride horses, cuddle cute critters and milk cows. Myella near Rockhampton is a popular spot.

Rockhampton in central Queensland is the beef capital of Australia. Yes, they have one of those. Presumably, the burgers are better in Rocky.

Queensland is packed with great beaches – they’re everywhere. The most famous being Whitehaven in the Whitsundays, which is so unbelievably picture-perfect you’ll find yourself yearning for a Bounty bar, even if you hate coconuts.

Show some respect for the native dog, which was actually brought over by the first Aboriginals as hunting dogs around 40,000 years ago. That makes them pretty good at hunting. Keep your distance and don’t feed them. You’re most likely to see them on Fraser Island. 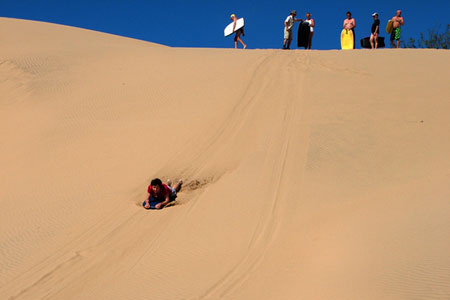 Big wooden buildings with huge, wrap-around verandahs, glasses kept in the fridge and wrinkly men in shorts perched on ricketty bar stools – that’s what we want from an Outback pub. And Queensland has heaps of them.

The Gold Coast boasts loads. So if you’re a rollercoaster junkie, you’re in heaven.

Yes, they taste like a bath sponge, but they’re very Aussie and they’re from Queensland.

There are too many stunning blobs of land off the Queensland coast to list. But we’ll tell you a few of our favourites: The Whitsundays are famous for their incredible beaches – like Whitehaven which bears a striking resemblance to the beach Tom Hanks got wrecked on in Cast Away; there’s also Hinchinbrook Island which is the wilderness walkers’ paradise; Fitzroy Island is full of adventurous backpackers and is great for partying; Magnetic Island is the sunniest; and Moreton Island is sand-tastic.

The Town at the End of the Rainbow?