Yes, October 13 is World Zombie Day and the shuffling hordes are set to take over London in the name of fun, filth and raising money for homelessness charity St Mungo’s.

Since it’s 2006 birth in Pittsburgh – fittingly the college town of zombie movie master George A Romero and where he filmed his classic Dawn Of The Dead – World Zombie Day has taken over the world: this year zombie fans in more than 50 cities, from New York to Paris to Hong Kong, will take to the streets in honour of the brain-eating beasts.

World Zombie Day: London will mark the event with a plethora of monstrous goings on, most notably a gory pub crawl around the city, plus film screenings, live bands and even a sexy zombie burlesque show.

This year, too, sees a change to the programme, with the 2012 London version promising to be bigger and bloodier than ever before.

The traditional zombie pub crawl shuffles off on Saturday at 1pm with a new route to allow those somewhere between alive and dead to menace a host of London landmarks.

“We wanted to revamp the route,” says Stephen Uden, one of five co-organisers. “It had been the same for the last four years or so – it’s always started at Marble Arch, gone down Oxford Street and ended up at Piccadilly Circus.

This time it’s totally different.”
The new route kicks off at Tate Modern and moves, slowly, along the South Bank, before crossing Waterloo Bridge, passing Charing Cross and Piccadilly’s Statue of Eros.

“The change was inspired by trying to combine some of the best sights of London with all the fun of World Zombie Day,” co-organiser Lauren Saunders says. 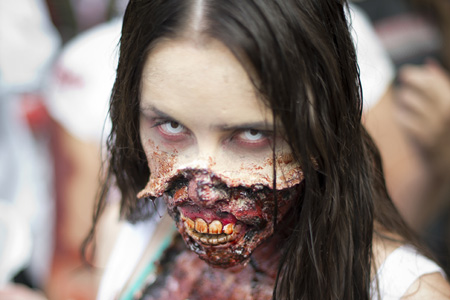 “Some people travel here just for the day so it’s nice to have the whole London experience. It also mixes things up and provides something new for our seasoned attendees, too.”

After winding its way across town the zombie crawl ends up at The Intrepid Fox pub near Tottenham Court Road for a night of drunken debauchery, but not before a number of hour-long pub pit-stops along the way.

For those with the stamina, the undead antics carry on into the night with performances by steampunk band The Men That Will Not Be Blamed For Nothing (which includes stand-up comic Andrew O’Neill as a member), burlesque stars Kitty Minx and Ruby Fortune, as well as comics Tiernan Douieb and Danielle Ward.

Before you think it’s all blood, beer and brain skittles, though, there are rules governing this day for the dead.

“We’ve always known that organising the public and keeping them under control is very important [more so when the public is dressed like the worst horror film frightmare you can imagine], so every year we wait until we have the majority of the masses gathered and then we go through the zombie rules,” Uden says.

These rules include: using the ‘haunted house rule’ – don’t touch anyone; don’t attempt to frighten anyone who is not part of the procession; and no trashing the place. In other words, don’t go scaring the shite out of some poor kids, and bang on some unsuspecting sod’s house, leaving bloody trail marks down their living room window. 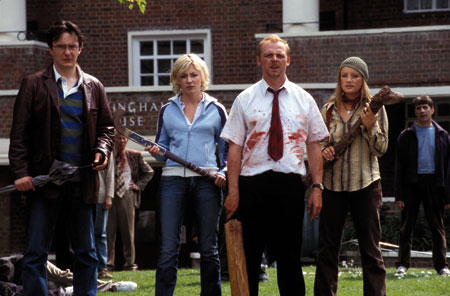 Do, however, feel free to get as inventive as possible with your zombie dress.

“People have been getting much better at doing the zombie look, much more elaborate,” Uden adds.

“A lot are using prosthetics and contact lenses, and they’re getting more and more creative every year. Half the fun is seeing what people are going to come up with.”

Since WZD: London’s inception in 2007, zombies’ status has grown.

Once the much-mocked monsters of horror, their shuffling slowness limiting their power to petrify, zombies were given a shot in the arm, so to speak, by Danny Boyle’s 28 Days Later in 2002 (although this was about the ‘infected’ and not ‘zombies’, as the Mancunian Oscar-winner points out) and the 2004 remake of Dawn Of The Dead – both films positing the flesh-munchers as fast-footed speedsters.

Even Simon Pegg and Nick Frost’s hit spoof Shaun Of The Dead, which will be screened late on WZD at Leicester Square Theatre, took zombies to a new audience.

As vampires won fans thanks to the abstinence-preaching Twilight saga, zombies have followed, but they’re now set to inherit the crown from the pale-faced neck biters, with TV shows such as The Walking Dead and Brad Pitt’s upcoming film World War Z (out June 13, 2013) staking the vamps’ claim to the top spot.

“Zombies and vampires have always been popular – because they touch an innate part of our humanity,” Saunders says. 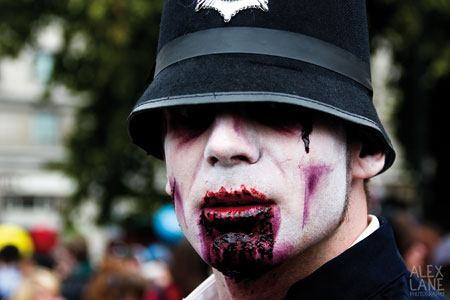 “There are stories of the undead in every culture, because humanity has always been obsessed with its own mortality. We’ve been interested in death and beyond for as long as we’ve been able to question our own existence, so it makes sense the thought of returning from death, being undead, is alluring – be it as the superior sexy vampire or its terrifying flip side, the brainless walking corpse.”

Fellow organiser Dave Beveridge believes zombies are a reflection of ourselves: “They’re us in the mirror, staring at our mortality and fallibility. They represent the monster of the ‘group’, the mass threat of humanity.

“Being a zombie is a chance to get creative, to indulge your fears and become empowered through costume,” he adds. “Losing your human skin and surrendering to the love of the WZD community is what brings me back every year.”

So join in – how often are you likely to not only see London become a living, breathing, horror movie, but also be an active participant in the zomb-ocalypse?

Other traveller reviews on Syria

Getting tanked day and night in Gili T