Remember,” urges my dive master, “if you start feeling drunk, let me know right away.” It’s a request that would sound strange at the best of times, but right now, at 8am on a boat in the Caribbean with a bar nowhere to be seen, it’s downright odd.

But then I remember what we’re about to do. And gulp.

I’m in Belize, a tiny Central American country home to the world’s second biggest barrier reef, and I’m floating above the Great Blue Hole. The aptly-named sinkhole, labelled one of the world’s 10 best dive sites by scuba godfather Jacques Cousteau, seemingly drops into nothingness, as if the plug’s been pulled out of the ocean and we’re about to get sucked in.

We’re to dive down 40m into the hole, a depth far greater than I’ve gone before. That means it will be the first time I’ve been at risk of nitrogen narcosis, a condition resulting from breathing too many pressured gases that basically makes you feel wasted. It sounds appealing enough, but at 40m under, the results can be disastrous as you’re tempted to do things like give your air to the fish, or simply keep swimming down, down, down, happy as Larry until the lights go out.

And so, firmly promising to let my designated diver know if I’m hit by a sudden streaking urge, we take the plunge.
Down we go, 10m, 20m, 30m. The water is unfeasibly warm and the visibility spectacular as we skirt the wall of the subterranean cave, deeper into the abyss, which continues down for 125m. In the distance a lone bull shark eyes us curiously before continuing on his way.

And then, at around 35m, the main attraction comes into view. The wall suddenly gives way to a gaping cavern entrance, home to the giant stalactites that prove the site was once above sea level.

Escaping the impenetrable darkness below, I dart between two of the looming columns and into the cavern. The towers of stone line up into the distance, like the thick pillars of an epic throne room of some sunken medieval castle. Swimming between them, like dwarves discovering the battle scarred remains of some once mighty fortress of giants, is fantastical and surreal. Monsieur Cousteau, it seems, knew what he was talking about – it’s as spectacular and spooky as any dive I’ve experienced.

Plus, to top it off, the narcosis never comes and the fear is long forgotten, too busy are we at taking in the sights. The only problem is that, at 40m down, we devour our air in no time, meaning it’s all too soon before we must return to the surface reality. 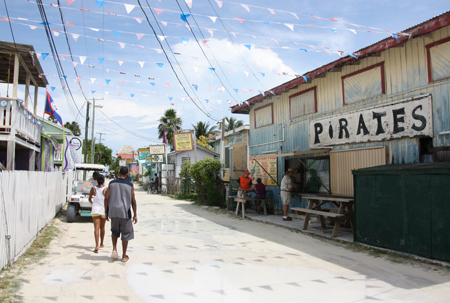 I’d reached Belize a few days before my Blue Hole adventure, powering over the border in a boat from the Mexican town of Chetumal. Arriving by water had seemed a fitting way to begin my travels around a country which owes its very existence to a pirate past.

It was in the 1600s that British chancers first started settling on this 300km stretch of Caribbean coastline, protected by the now World Heritage-listed barrier reef, using it as a base to launch attacks on the Central American Spanish colonies, of which Belize was technically a part.

A century later, and after a promise that the settlers would switch piracy for logging, the Spanish grudgingly accepted the Brits could stay. That paved the way, once the Spanish had been kicked out, for the country, which is about a third of the size of Tasmania, to become a British colony, then called British Honduras, in 1862. It was only in 1981 that Belize finally gained independence, after a 30 years stand-off with Guatemala, which was finally settled by Britain’s persisting military presence, plus a promise to build the Guatemalans a road to the coast.

As it turns out, the Guatemalans never got their road, but the British presence is still keenly felt on this English and Creole-speaking strip of Latin America, where reggae and rastas are the order of the day.

My first port of call had been San Pedro, the main town on Ambergris Caye, the country’s biggest tourist hub. Big, that is, by Belizean standards.

Measuring around 40km long and less than 2km wide, Ambergris is no manic metropolis. But it’s certainly bustling, thanks largely to its popularity with vacationing Americans who clog the narrow sandy streets in their zippy rented golf carts.

I lose a couple of days to rum-swilling in the Pedro party scene, but grow tired of the electric traffic and the strangling sea grass that makes the island’s perfect warm waters frustratingly out of reach. The solution is a quick boat ride down the coast to the even smaller Caye Caulker, a legendary backpacker destination where the golf cart traffic eases, the prices fall and the pace slows.

Sauntering down the laneways, I secure myself a dirt-cheap beach shack for the week, fill the fridge with Belikin beers and assume the position in my hammock, determined to embrace the complexities of island life.

And so the lazy days become a blur of beers and hammocks, rice and beans until I book myself onto a couple of trips to explore the reef that dominates Belize’s waters.

First I have my day discovering the submerged castles of the Great Blue Hole, before opting to meet the locals at Shark Ray Alley in the Hol Chan Marine Reserve. Just a few minutes ride from shore, we’re soon in a channel between two patches of reef. In we jump to the waist deep water, along with a few morsels of fish from the crew.

Soon enough we’re surrounded. Harmless nurse sharks and sting rays barge past and nuzzle from every angle, eagerly nosing their way into the conch shells housing the bait.

At first I nervously avoid the hungry snouts, but soon there’s so many of them it’s hard to avoid stepping on the rays’ soft rubbery flesh, which seemingly covers the sand like the flooring of some warped children’s playground.

And then, after half an hour of playing in the shallows, the food supply is exhausted and our new friends are gone as quickly as they appeared. Our company, it seems, isn’t quite as scintillating as we’d believed. 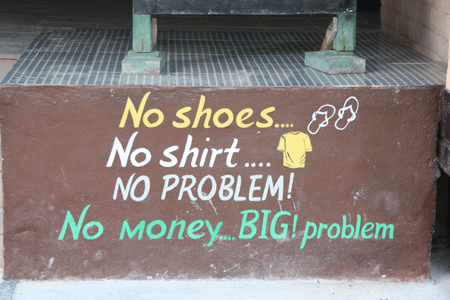 Back on dry land I decide it’s time to explore more of the country and so make plans to leave the northern cayes behind me and hit the road.

My target is the town of Placencia, a full day’s travel to the south. This means that, after a quick boat ride to Belize City, I get to experience some of Central America’s infamous chicken buses. They’ve gained their name, in case you were wondering, because once on board you could find yourself sitting next to just about anything or anyone, including a feathered clucker.

And soon enough, after escaping the cacophony of the station, I’m in my seat (no chicken for company), crossing my fingers that it’s the right bus. With Pitbull blaring at tinnitus-threatening volumes, we screech off, tearing down one of Belize’s three major roads, shuddering violently to a halt every time somebody roadside raises so much as an eyebrow.

A good proportion of those eyebrow raisers are women bearing buckets of food, generally steaming hot rice and fish wrapped in banana leaves for $1 a pop. They jump on board and ride with us for a few minutes, doing a storming trade amongst the captive market as the smells waft through the windswept seats. As quickly as the women appear, they disappear again, buckets empty and pockets full.

And so, after a day of munching along the jungle and plantation roads, I arrive at Placencia. It’s a scattered, laidback fishing community that’s catching onto tourism in a big way thanks to boasting the mainland’s best beaches. But I’m not here for the sand. I’ve got my very own pirate experience waiting for me, in the form of a three-day sailing trip around the southern cayes.

Belize was recently named the world’s fourth happiest country by London’s New Economics Foundation and it’s when you’re on the water that it’s easy to understand why.

When not sun-baking on the deck, we spend our days snorkelling with playful loggerhead turtles and spaceship-like spotted eagle rays. Every now and then our skipper Iggy nods to the jumping rod at the stern and one of us reels in a mackerel or mutton snapper. Our trusty captain then supplements lunch by diving for conch, which he cooks simply by adding lime juice to create a lip-smackingly good ceviche.

Watching one of the fishermen rise smiling and victorious from the water, conch shell in hand, one thought repeatedly crosses my mind – how did this place only get fourth?

Get a room with the Godfather: Splash out at Francis Ford Coppola’s Belizean hotel

There are times on the road when you simply have to forget about money and take your credit card for a spin. Generally, it’s for that pricey “must-do” experience like a skydive or rafting trip. But sometimes, just sometimes, you’re tired, dirty and come out in a rash simply by thinking about another 20-bed mixed dorm.

Luckily, Placencia has the perfect location for recharging the batteries during your Central American odyssey in the form of Turtle Inn (coppolaresorts.com), a fancy resort owned by none other than iconic Hollywood director Francis Ford Coppola. Sure, you might not want to cough up a couple of grand a night to stay in the Coppola’s own villa, complete with personal “houseman” on call 24 hours a day.

However, for a more feasible $299 you could get your own beachside cabana for two people. Remember, this is cabanas Hollywood style, meaning it’s no empty wooden box. Expect your own full-on house, together with a walled-in garden and outdoor shower. There’s even a bottomless cookie jar. All that means that whether you relax by the pool, snorkel the reef, or simply take pleasure in lowering the tone for a night or two, rest assured you’ll leave fully charged for the chicken bus out of town.