Pedro Oliveira is one of the most celebrated photographers in the world right now. His project “Careful: Soul Inside” has already won many accolades. Pedro’s focus has always been to portray the lives of the poor, especially the homeless. Oliveira feels that the majority of society considers the homeless as invisible creatures.

It is heartbreaking to know that even in 2020, almost a million people in the US take to the streets to sleep every night. Pedro’s condition was also similar when he was a child. He had a family of two siblings and his mother. His father died when Pedro was 8. He and his family had to live for a couple of years in what used to be a garage in his uncles’ house. It was from this period  that later in life his inspiration came from, and what gave him the conviction that society generally stigmatizes and doesn’t pay much attention to those living in poverty.

Before becoming a professional photographer, Pedro studied Communication and Advertising at Portland State University. At that time, Pedro didn’t know anything about photography. One day, one of Pedro’s friends suggested he should buy a camera as a form of hobby. Although he didn’t see at first a reason why he should buy one, he took his friend’s suggestion. That was the turning point in his career.

Pedro immediately fell in love with photography as he started experimenting with his newly-bought camera. Although Pedro’s photos make it look like he had received formal training, he didn’t. He is a self-taught photographer who loves to experiment with his camera and frequently chooses simplicity over overly complicated light setups or fancy productions.

From the first day, Pedro was obsessed with color grading and Photoshop. As soon as he took some photos, he would see how they looked after editing their colors. It was his obsession with photography and editing that has brought him to where he is today. “ I am obsessed with light, and even when I am not shooting professionally, I am trying to dissect angles, and light schemes, or trying to guess the color theory used within movies and tv shows,” Pedro confesses.

Throughout his career in photography, Pedro has portrayed the pangs of homelessness through his lenses. He doesn’t want people to see his photos as just another picture; instead, he wants them to understand the pain that homeless people go through every day. He wants his viewers to know the stories behind these marginalized people.

In his pursuit of taking photos of the homeless, Pedro had met Veronica, one of his subjects. She was his sister’s age. While talking to Veronica, Pedro found out that she was a heroin addict. She had shared how her parents wanted to help her but she had already become dependent on heroin by then. Heroin became her necessity and it was slowly consuming her life. While Veronica did know the consequences, she couldn’t help herself. 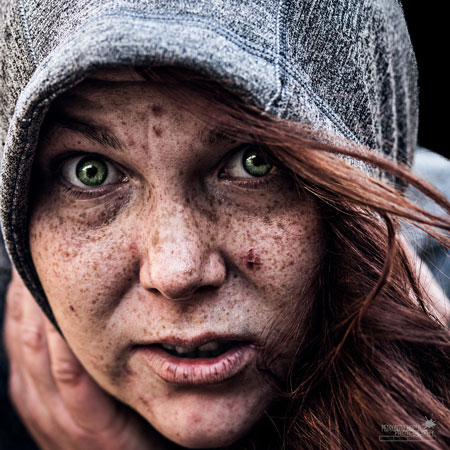 A couple of years later, after Careful: Soul Inside had become world-famous, Pedro had reached out to Veronica. He showed her the photo that he had taken two years back. Veronica was moved to tears, seeing her sad face. But she also added that there was something about the photo that made her look pretty “from the inside” and that it was her dream to have her picture taken.

That’s the connection that Pedro wants to make. He wants society to see the inner-self of the homeless instead of considering them as hopeless people. Pedro doesn’t make a dime from these photos. He only wants everyone to see the beautiful side of the homeless by raising awareness through his pictures.

There’s some fin in the water: Shark prank terrifies boaters in Finsbury Park