In Australia, there is a long history of ethnic comedy, particularly among Greeks and Italians navigating their divided nationalities, delivering hilarious and all too familiar thumbnail sketches of multicultural Australia. To outsiders, listening to Australians casually referring to wogs, laughing about the way Italians talk or the way Greeks love to concrete their front yards, it may come across as a sign of coarseness, a sign that Australians remain insensitive to matters of race and ethnicity.

To the comedians performing the material, though, the Australian experience, of fusing various immigrant cultures, is a winning formula, which, ultimately should not be censored because of political correctness. A new show, Comicus Erectus, combines the reflections of two Greeks, an Italian and a Turk and, according to Basile – a Greek comedian from the US, who’s got one name, like Cher – the idiosyncrasies are fair game.

“You don’t really work up to the stereotype of the different ethnicities,” he says.

“What we do touch on is what we all went through, it doesn’t matter what ethnic group you came from. For me, growing up in the States, my parents were right off the boat and I was raised in a Greek way in a wide open American society and I went through the same things that these guys went through over here. We’ve all had the same things – we’ve all had the same grandmothers, the same grandfathers – just spoken in a different language. We talk about the stuff that everyone dealt with.”

Joe Avati, from an Italian family but born in Sydney, insists humour is the most effective way for people to make sense of their mixed identities.

“No one’s got the guts to say this stuff except for us,” Avati says. “People have an affinity with the show because they see their lives on stage. They’ve thought to themselves, “I’m not entirely Greek or Italian but I’m not entirely Australian – who am I?’

“And then they come to this show and see it on stage – when you can make someone feel that, they just want to hug you.” 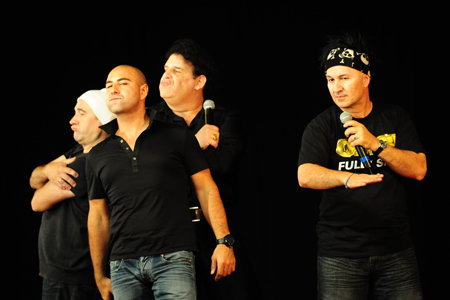 Avati is untroubled by suggestions that they may be treading on controversial ground, insisting that Australia, above-all, is equal-opportunity when it comes to giving each other a hard time.

“It’s a really Australian thing to do, to take the piss out of ourselves,” he says. “I’ve been comparing the ways I learned about my culture – we had an Australian family move in next door and the kid came over for dinner. He was eight years old but that was the first time he got drunk, and that was just on the salad. All the bloody vinegar being so potent at our house. Just all the little things – my real name is Guiseppe and I can never find a mug with my name on it.”

Similarly, Basile, who grew up in New York, found he stood out like a sore thumb and has shaped much of his material around the clash of cultures.

“Being named Basile was not easy – my mother’s name was Rosemary, my father’s name was Herb, so they called me Basile, which destroyed my life completely. It’s not the most masculine name to go through high school with,” he says.

“The tooth fairy – my parents didn’t understand it. I’ll never forget, my tooth fell out and went to my mum with it and she was like, ‘don’t worry – I take care of everything’. The next morning, I look underneath my pillow and I find my mother and father’s personal cheque for $10. They’re not getting the concept. This is what I had to go through.”

Perhaps the fact that certain ethnicities are happy to be the butts of jokes indicates a level of comfort, of familiarity. Australians don’t pull any punches when it comes to Kiwis and Brits, because they know they don’t need to be too careful with them. Similarly, Greeks and Italians are sufficiently part of the furniture – it wasn’t always that way – to be in on the joke. There are, inevitably, less comedy routines about Muslim or Somali immigrants, although Avati insist it’s only a matter of time.

“In about 10 years there will be – you can start to see it already,” he says. “They’re coming here when the tolerance is much greater than when my dad came across and got called a wog and was discriminated against. There was a lot of racism – the immigrants today have it a lot easier but there’s still have enough fodder there.

“There’s a comfort level now – and the show, it’s not just Greeks and Italians coming. These things aren’t as foreign now. It’s everywhere in Australia because we’re so multicultural. A lot of people have a problem talking about it publicly, everyone being politically correct. People aren’t allowed to talk about it – but we are, because we’ve got one eyebrow.” 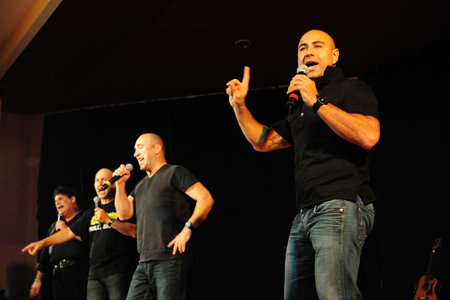 Avati believes discomfort with jokes about ethnic differences is actually counter-productive, chilling relations between people of different backgrounds that might be thawed through humour.

“It’s an obstacle,” he says. “You can’t call anyone a wog in England – it’s a black guy. And you can feel it sometimes in the show – people bring relatives from overseas and they’re a bit apprehensive about it but they see everyone laughing and everyone’s cool about it.

“It shows that we’re not too hung up about it. It cuts down the barriers – it means we can be mates. It doesn’t matter where you come from.”

In the meantime, Avati and Basile are happy to share stories from their earlier years, anecdotes that epitomise their sense of being different from other kids at school.

“Every Monday with show and tell, the teacher would get the kid up there and the little Aussie kid would have gone waterskiing, hanging out at the beach all weekend,” Avati recalls. “And Guiseppe had to go to the garage to fill up bottles up tomato sauce, putting lids on bottles or had to go off and kill a pig to make the salami. What are you going to say when you’re seven years old? Every Monday was when I felt really different. You’d go to the big wog weddings and I’d always think, ‘I wonder if that kid is doing all that – do they have the same experiences?’”

For Basile, growing up in New York was no less dislocating.

“I knew I different was at lunch,” he says. “The other kids would have sandwiches and Basile, what have you got? I got a goat’s head – you can’t really trade up. My mother made sautéed brains and put it in some tupperware. I love them but don’t give this to me at school – these other kids think I’m a monster.

“I told my mum about it, so what does she cook? A T-bone steak. My friends thought I was the wealthiest guy in the world.”

Comicus Erectus is playing in Sydney until August 26. See joeavati.com/shows

Spend the night in a ‘haunted’ jail at Fremantle