The adventure of a lifetime in Fiji

They say timing is everything, whether you’re proposing to your other half, boiling an egg or releasing a film starring Ryan Gosling. Take Fiji – my belief is that right now is the best time to go, it’s the period between the calm and the storm. There’s a buzz in the air, an excitement brewing, but it hasn’t exploded. There aren’t droves of foreigners littering the beaches, sunburnt westerners crashing their jetskis into each other, or drug-fuelled full-moon parties – at least not that I wasn’t invited to anyway.

Yet the adventurous side of Fiji is emerging like a curious puppy and it’s blossoming. What Fiji has going for it is that it’s an exciting place wrapped up in a peaceful package. And when I say package, I’m not referring to the all-inclusive honeymoon and my-first-family-holiday packages that Fiji has been known for in the past. The country is encouraging you to choose your own adventure.

When we first arrive in Nadi, we’re greeted by traditional Fijian dancers, ukulele players and adorned with leis. Sure, the clichés are still there, it’s a country that depends on tourism. “It used to be the sugarcane but now it’s you that
is our number one priority,” our guide tells us, en route to the hotel.

You can tell they care too. Instead of hassling you in the street to buy the local wares, the Fijian people go out of their way to make you feel at home, always smiling, always greeting you with a friendly “Bula, Bula”. It’s hospitality they’re selling, not novelty keyrings.

After the first night, spent saving the Fijian turtles, which is another way of saying I was drinking Turtle beer all night – a beer that donates five per cent of its profits to saving turtles – I’m awoken by a phone call. It’s 7am and the front desk informs me that my surf instructor has arrived. I throw on some clothes, gargle some toothpaste and rush to the front desk to meet him, apologising for my incompetent alarm. He tells me not to worry – I’m on ‘Fiji time’ now. For someone who is perpetually late, this is music to my ears. ‘Fiji time’, I later find out, is used as an explanation for anything from entrees coming out after mains, to buses not showing up. In other words: relax.

My surf instructor Inia waits for me at the shore with his boat loaded up with surfboards and pineapples. He grins with excitement about the surfing safari we’re about to embark on. What he lacks in teeth, he makes up for with his ripped, brown body. We’re heading for a break called Swimming Pools, which I hope mirrors its name – playful and safe. As a novice surfer I tell Inia he’s dreaming if he thinks he can get me to surf the famous Cloudbreak.

We speed past it and chuck a right to Swimming Pools, where all my expectations are surpassed. It’s named after the colour of the water and the clarity of the break. Turquoise water and soft, inviting waves. I’m deliriously uncoordinated, so I’ve never really been any good at surfing, even though I’ve made countless attempts. Thankfully after all these years I have Inia, a wide board and, as we pull up, the waves to ourselves. You couldn’t ask for a more perfect setting.

On these charming 2ft waves I’m shown where I’m going wrong, how to position myself and how to prolong the wave. My surfing skills were impotent before but it’s like I’ve been given surfing Viagra – I’m up all morning.

Even though it’s been two years since Fiji’s surfing restrictions were lifted, allowing anyone to surf the breaks without a permit, the crowds still aren’t there. Sure, there might not be much competition for these two-foot babies, but we have the whole break to ourselves for over three hours. Even as we coast past Cloudbreak there are only a handful of surfers in the water. It’s incredible to think that a country with access to waves like these aren’t pumping surfers out like Russian ballerinas. Give it a few years,
I reckon, and Swimming Pools will need its own lanes. 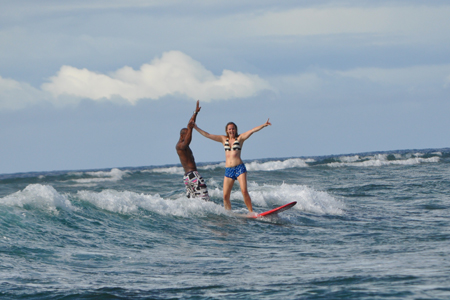 I’m not sure how, the next day, I end up in a muddy river in the rain, rapidly going downstream, fully clothed. We had been on a jungle trek in the rain. In paradise, the last thing you expect is rain. After an eerie longboat ride through a dark jungle river, we trek through the Namosi Highlands to view the spectacular waterfalls. The clouds quickly turn nasty and our Fijian guides consider sending us back. We tell them we’ll push on through – it’s not everyday you’re in Fiji, and you never know, it could pass. It doesn’t.

The grey clouds turn into an epic shower and with each step our feet sink deeper into the mud. At times, they become stuck and I have to use a stick to break free. I feel like a soldier on the Kokoda Trail, except I’m wearing thongs and a sarong. We eventually make it to the falls and soak our wounds, muscles and mud-stained clothes in the chilly pools. On the way back, it’s suggested by our guides that we take the express lane, that is, the rapidly flowing river. One of the guides jumps in and is sucked along like an Olympic luger. We’re pretty quick to follow him in. Anything to avoid the arduous walk back through the mud.

At some moments it’s adrenaline-pumping fun, like tubing without the tube. At other times, it’s terrifying. Throw in a few thousand drunk travellers and some riverside bars and Fiji would be sitting on a goldmine. Something tells me the deeply religious Fijian people will never go down this path – at least I hope they don’t. Right now, it’s just the small group of us and it’s peaceful – apart from a few screams and the laughing guides.

“Don’t worry, we don’t have crocodiles in Fiji, just cannibals,” one of them quips. I just try my best to keep my head above water and not think about sea snakes, tangled roots, cannibals or anything likely to drag me under.

The current takes us back to our longboat without any injuries, just a few bruises from body pile-ups along the way. Once aboard, the rain rinses off our Namosi mud-stained clothes and we head back into town. 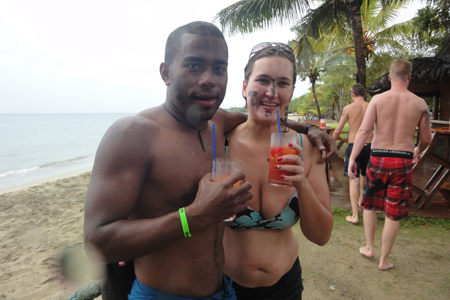 That night we are introduced to Kava and its calming properties. The powder is made from the pounded root of the pepper plant and they call it Fiji’s national contraceptive – because it makes men too tired for action. We’re offered the drink at a traditional ceremony, our nominated “chief” of the group hands us the bowl of murky water and in homage to the day, I clap three times and down it. Maybe it’s the muddy taste but I feel closer to the land of Fiji than ever before.

The numbing effects of the Kava are immediate, sending my body into a nirvana that is probably heightened by the several beers I’ve consumed – in the name of the turtles – and the stunning surrounds. We’re overlooking the breathtaking Coral Coast and the rain has subsided, produing a sunset I tell myself I’ll never forget. The blissfulness takes hold with every bowl, time is suspended and I could quite happily stay in this state forever. Now I understand “Fiji time” isn’t about sleeping through alarms, but a state of tranquillity where alarms don’t even exist.

Timing might be a precise art but I hope this country remains in this relaxed time lapse for a while – I’d hate it to change too much. Tourism is a double-edged sword and although the country needs it to survive, I hope Fiji doesn’t sell out her soul for a keyring. Something tells me the kind-hearted people won’t do that, although they might persuade you to get off the deckchair and into the mud, with their charming, encouraging nature. As we were told on the first night, “you people are sweeter to us than the sugarcane”.

Glastonbury breaking with tradition and considering a move

Events in London this week: Words in the Park