Comedy in London: Festival Of The Spoken Nerd

Not only the preamble to a bad joke, but a conflation of bangs and flashes and applied mathematical conundrums that make you think about the universe in a way you never have before. Welcome to Festival Of The Spoken Nerd, a variety group with the ability to turn even the mildly curious mathematician into the fearlessly inquisitive, using the medium of humour.

Having sold out the Theatre Royal Haymarket in January with their previous show, Bigger, Better And More Dangerous, the trio are back this month with another whizz-bang offering, Pi-Curious, at central London’s Bloomsbury Theatre.
“Our shows scratch the itchy part of our audience’s consciousness,“ Arney says. “It’s all the nerdy geeky stuff they could ever want laid out in front of them.“

Bigger, Better had Arney, slip on a costume and serve up a sweet ditty about a disgruntled sun, while Mould demonstrated the missing fundamental in sound. Meanwhile, number ninja Parker from Perth, calculated how much water there was in the world. There were also ’oohs’ and ’aahs’ aplenty from the audience for an elaborate experiment involving shiny metal parabolas focusing a beam of light across the stage at cotton wool, which subsequently combusted with a satisfying ’whoof’.

The trio usually invite a host of equally atomic guests onstage and the results are explosive. At the last show wiry Australian comedian Kent Valentine recounted a teenage misdemeanor involving a wayward friend and homemade napalm, plus there was a flash of fire and plenty of noise when UCL chemistry professor Andrea Sella manipulated the chemical compound nitric oxide. Hewas quick to warn that while it has a role in making Viagra, digesting it would not produce the same effect.

At this month’s show, comedian and maths graduate Matt Kirshen, mathematical juggler Colin Wright, and glow-jugglers Feeding The Fish will be providing the added charge.

Arney is energised about her contribution. “I’m going to get the audience to attempt to spin the longest number ever conceived during an epic, giant sing-a-long, plus, I’m attempting to do data analysis on the state of the nation’s happiness and financial well-being through the medium of 20th-century pop dance,“ she says.

Audience participation is a staple part of the show, just to make sure, if nothing else, the trio’s seemingly inconceivable theories are not escaping the crowd.

“We’re getting everyone to write a ’pi-ku’, plus there’s a live auction where we intend to give away £1m,“ Arney, 31, says. “We’re pretty sure that’s not going to happen, though, due to the way the audience will play each other. One person’s bound to screw it up.“

However, when you mix a bunch of zany scientists together, armed with reactionary elements, you would be forgiven for expecting them to do some screwing up of their own.

“When we performed at the Theatre Royal there was an insurance company rep standing on the side of the stage the whole time,“ Arney explains.

“Fair enough, we’re talking about the oldest theatre in London, but he wasn’t there to make sure we didn’t burn the theatre down. If we all died, he’d need to know whose fault it was.“ 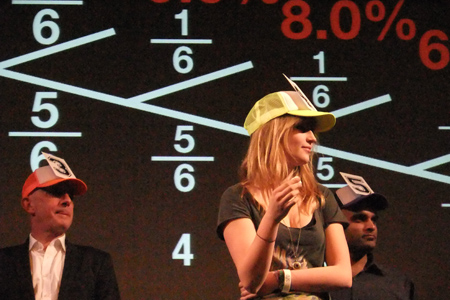 Before Festival of the Spoken Nerd

Before they were introduced to each other while on the 2010 Edinburgh Fringe Festival circuit by “science grandaddy“ Robert Ince, Arney, Mould and Parker were already forging their own successful careers in geek comedy – and still are.

Mould, 33, is one half of comedy sketch act Mould & Arrowsmith, and, until the BBC moved to Manchester, he was also the Blue Peter resident scientist.

“Genuinely, the shows I do for kids, I can pretty much use for adult shows, too – just with ruder jokes,“ he says.
Before joining Spoken Nerd, Parker, 31, was performing his own show, Your Days Are Numbered: The Maths Of Death. He was also possibly the only person to hold down the prestigious title of London Mathematical Society popular lecturer while having a sold-out comedy show at the Edinburgh Fringe. Now, he regularly appears on BBC Radio 4’s Infinite Monkey Cage, plus he writes about maths for The Guardian.

Arney, named as one of TV channel’s Dave’s top 10 stand-ups to catch in 2011, is one part of female comedy musical act
The Balconettes.The stars collided and it made perfect sense for the three to collaborate, billing their act as a “celebration of comedy and unashamed geekiness“.

“We were all doing our own thing at the Edinburgh Fringe – just comedy, not particularly nerdy, and people started telling us to see each other’s shows,“Arney says.

Mould adds: “What that resulted in was not us necessarily seeing each other’s shows, but flyering at them for our own benefit, you know, like, ’well, if you liked that, you’ll really like this’.“

It was Parker’s idea to become a collective and they tested the water in October 2010, tagging a variety-type segment on to the end of one of Arney’s gigs. “It sold out in a day,“ Arney exclaims. “My clubs have never been sold out. It just struck a chord.“

The trio then took the show to the larger, but still more intimate surrounds of Angel’s New Red Lion Theatre, and performances continued to sell out months in advance.

Now, the Bloomsbury Theatre will burst at the seams with insatiably curious geeks – “people who like maths, but just ended up as accountants and need some stimulation,“ says Arney. Or as Mould adds: “GCSE-level and uni graduates, who didn’t listen in science and maths and kind of wished they did – them, and sociable nerds.“

The concept of geek comedy is not new. People such as  Stephen Fry and Dara O’Brien, both of whom have physics backgrounds, are modern champions of the brand, and shows like Guerilla Science and Uncaged Monkeys, including Ince, Brian Cox, and Arney herself, have been drawing in crowds for several years.

“We are not the first people to talk about science and maths and get a big audience for it,“ Arney says. “What we are doing, though, is taking all of it and throwing it into one big variety show – that’s what’s different.“