The Sydney Harbour is the Cadillac of harbours around the world. People flock from every corner of the globe to marvel up at the steel grace of the bridge stretching above their heads, to get lost in the soothing architectural design that makes the Opera House one of the world’s most famous buildings, or to lull their days away basking in the sunshine while sipping a beer and soaking up the energy that gives Sydney its magnetic pulse. (And, let’s be honest: We all know we love that scene from Finding Nemo when Nemo eventually swims his way into Sydney Harbour.)

But if you’re going to see Sydney and its Harbour properly, there’s no better way to do it than by climbing to the top of the bridge or walking along a platform in the sky – especially when it’s with a bunch of comedians including Kai Humphries, Daniel Sloss, Jared Christmas, Lawrence Leung and Michelle Lim, making it one of the most “riveting” experiences life could offer.

Remember that scene in Mean Girls where Damien talks about seeing teachers outside of school is like seeing a dog walk on its hind legs? Well, that’s sort of how I felt when I learned that I’d be climbing the bridge and doing the Skywalk with a bunch of comedians. Before heading out on these unforgettable, can’t-be-missed Sydney experiences, I found myself getting nervous and wondering what it would be like to hang around with comedians. What if they didn’t think I was funny? What if I didn’t understand their jokes? What if they were boring and didn’t actually make jokes in real life?

I can now say with confidence that I am actually somewhat funny, as I did manage to drop a couple of jokes and get a good laugh from a couple of them. On a more serious note, though, these comedians knew how to keep a constant belly of laughter erupting from the entire group. Whether it was Paul Foot pretending to be petrified one minute and then feigning a graceful, ballerina-like backbend over the side another minute, or Gina Yashere being the only person in history to make a Skywalk suit look cool, they all knew how to have a good time.

The experience of the BridgeClimb is unbeatable. The cars are speeding below you, ships are zipping about, and during the day, the bridge casts the most amazing shadow on the stillness of the harbour waters that wrap around the Opera House. 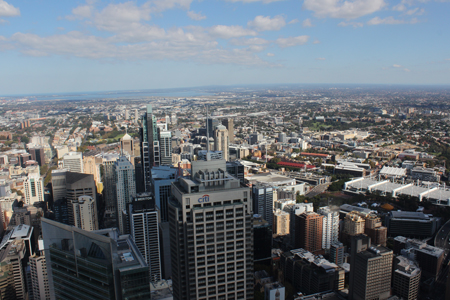 The view from Sydney Skywalk

The Skywalk is a different and less freeing experience than the BridgeClimb, but it still offers views of Sydney that send chills up your spine even on the warmest of afternoons. We could hear the distant pride of the bagpipes and music drifting high above the city from the Anzac Day Parade flooding the streets on what was a beautiful fall day that you could find only in a city like Sydney.

A 360-panorama of this city, whether it’s from on top of the bridge or along the Skywalk of Centre Point Tower, makes you feel like Sydney is too good to be true.

I’m a born and raised New Yorker, and though I think the world of my city, seeing Sydney’s ocean glow under the sun and sit so still and mesh so naturally with the sprawling concrete jungle of its urban veins blows my mind every single day.

There are heaps of experiences to be had around Sydney and around the rest of the world, but what makes traveling amazing is a combination of the incredible things you find yourself doing and the people you’re experiencing everything with.

Find out more about the Skywalk and BridgeClimb.

For tickets to the Sydney Comedy Festival, click here.

WTF of the day: The worst toy shop name ever

Bledisloe Cup 2014: Wallabies vs All Blacks