What Have We Been Ordering During Lockdown?

According to Google Keyword Planner data gathered by Betway Online, worldwide searches for ‘delivery,’ ‘food delivery’, ‘takeaway’ and ‘takeout’ rose by almost 300 per cent between March and May.

Which Takeout Food Is The Most Popular? 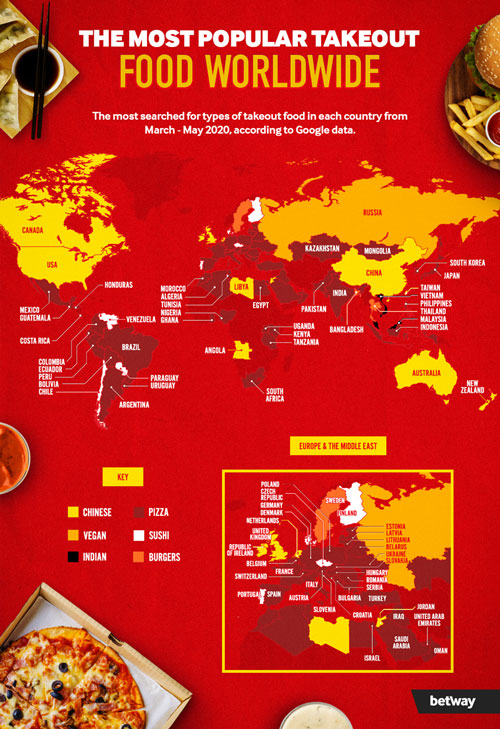 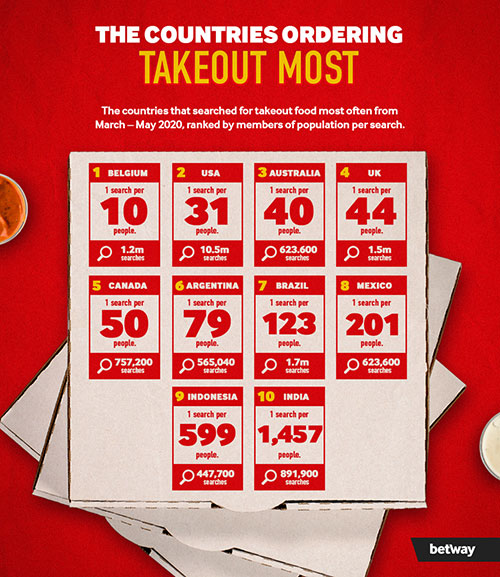 The figures show that pizza was the most-searched food in 55 of the 81 countries for which data was available. It proves particularly popular in eastern Europe, with Belarus carrying out the most searches for ‘pizza delivery’ per capita according to Google Trends.

Russia and Ukraine, meanwhile, were fourth and fifth respectively.

Interestingly, vegan food was the most-searched term in Russia, the only time it appeared in the top two searches for any country in the world. That could have something to do with the fact that it’s common practice for followers of the Russian Orthodox church, who make up 71 per cent of the Russian population according to a 2017 survey, to eat a plant-based diet during Lent, which ran from 26 February – 9 April this year.

Chinese was the next-most popular takeaway after pizza, topping the charts in 11 countries, including the USA, Canada, United Kingdom, Republic of Ireland and, unsurprisingly, China. In fact, when looking at the cities that searched for the term the most, all of the top eight were in English-speaking countries.

Instead, it was Denmark that scoffed the most sushi per person. Considering that raw, pickled and smoked fish have been staples of the Danish diet since the Viking era, perhaps its popularity is understandable. With nearby Norway being the largest salmon-producing nation in the world, there is also plenty to go around.

Which Takeaway Brands Are People Searching For?

Given its ubiquity across the world, it’s unsurprising that McDonald’s dominated searches for branded fast food companies. The burger-flipping giant is the world’s largest restaurant chain in terms of revenue and, as of 2018, had 37,855 outlets in 100 different countries.

Forty-one of 81 countries for which data was available searched for McDonald’s more than any other restaurant or branded food takeout. The highest concentration of those searches came from Europe, with 26 of the 30 European nations hankering for a Big Mac.

KFC was the second-most popular fast food joint, topping the charts in 23 countries, including the United Kingdom, Australia and South Africa.

But the country that most craved the Colonel’s secret blend of herbs and spices was Malaysia, amassing an average of 301,000 searches per month, more than any other country. It is estimated that KFC serves 25m customers every month in Malaysia, only 6.5m fewer than its entire population.

The menu offers various localised items like rice congee; a type of porridge and teh Tarik, a milky tea that is popular in southeast Asia. The most popular company in one specific place was Pizza Hut in the USA, which averaged 1.83m searches per month between March and May.

What Have We Been Doing During Lockdown?

Other than ordering food and watching large amounts of TV series and Netflix, what else have we been doing during lockdown?

We have also been very productive and reflective. It is no secret that for many people who were either unable to work from the office as well as those who altogether were unable to work, learning new skills, new languages and getting jobs round the house done were all high up the list of what we have been doing during lockdown. Many of us have been reflective too, with more people than ever undertaking home improvements, looking at options for equity release (more information) and reordering their financial practices.

Although more money will have been spent on food and takeaways, for the most part, people have saved money over the course of the lockdown, with their being a lot less upon which to spend disposable income. Many have also had the valuable time to take stock of and re-evaluate their financial and general life practices.