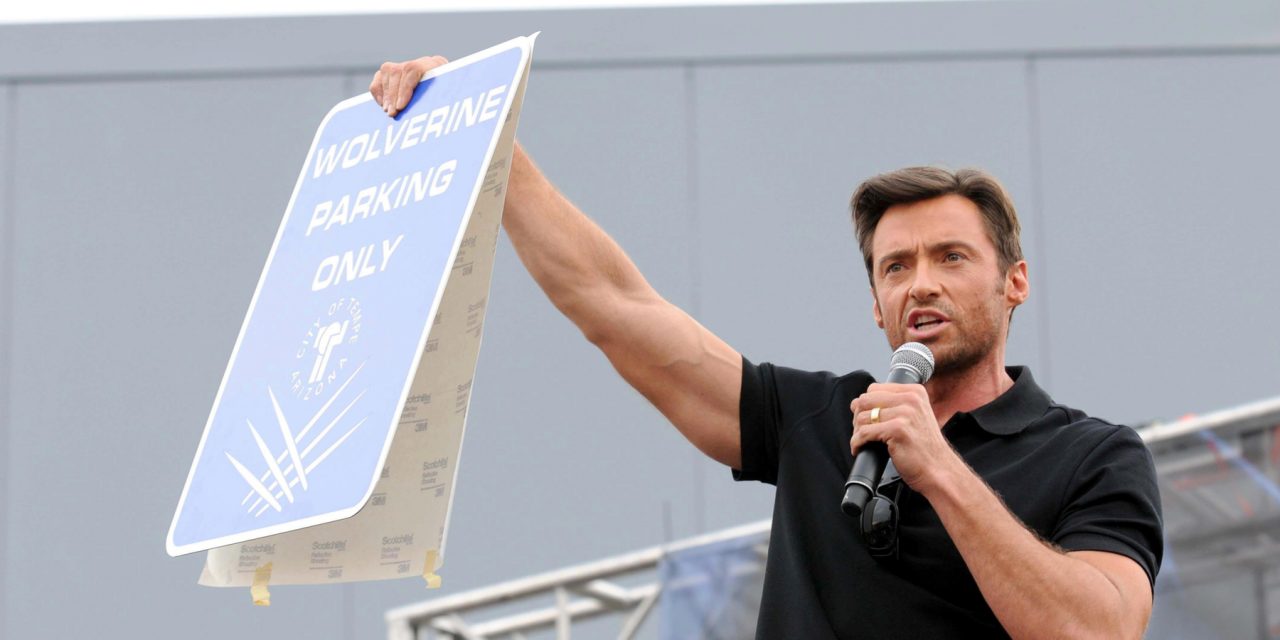 “I then realised the towel was meant to be covering my privates and I’d spent an hour waltzing around with it in one hand and a beer in my other hand,” Jackman sheepishly admitted.

This culture clash could just as easily have happened to the 44-year-old Sydneysider’s most famous on-screen alter ego – the role that thrust him from relative obscurity to global super-stardom 13 years ago, thanks to Bryan Singer’s X-Men – who now finds himself battling the Yakuza and samurai in the Far East thanks to the latest film in the franchise, The Wolverine.

It’s been four years since Logan, aka Wolverine’s, last movie outing, the poorly titled and received X-Men Origins: Wolverine, which crammed too many mutants and commercially targeted ideas into a haphazard film. 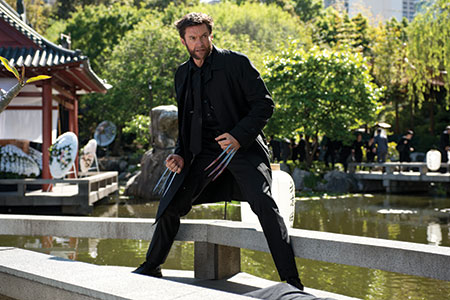 “You just look at that last movie’s title and see nine marketing intentions,” The Wolverine director James Mangold (Walk The Line) says of following up the previous series instalment. “You’ve got ‘X-Men’, ‘origins’, and ‘Wolverine’ – it’s like, ‘Do you want pepperoni with that, too?’”

The new film looks to correct that jumbled approach. “Origins was more of an X-Men movie,” Mangold says. “They didn’t give much time to his character, but we’ve found a way to give Logan more time.”

Now, Wolverine is centre stage and a lunchbox-favouring spectacle is sidestepped to make way for a darker, grittier, more brutal Logan who gets to throw unwanted evil ones off hotel balconies and grunts at others to go fuck themselves. 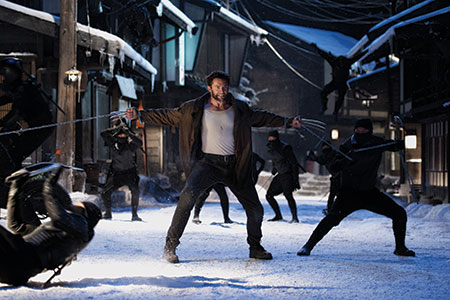 “Hugh wanted a chance to do something different and to deliver something to the fans who’d come to him,” Mangold says, referencing the legions of loyal followers garnered from Jackman’s star-making turn back in Bryan Singer’s 2000 original X-Men movie.

That something new was to transpose the formerly US-based Wolverine to Japan, and plunge him into the midst of a family feud with which he was intrinsically linked thanks to his adamantium-aided self-healing ways. 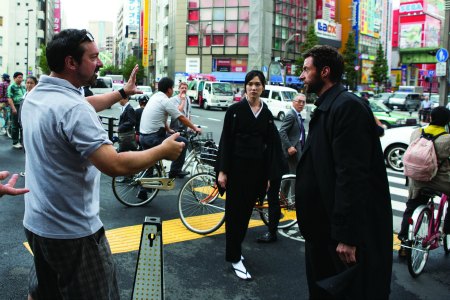 On set during the filming of The Wolverine

“Japanese cinema has been huge to me,” the New York- born director says. “Samurai films and Westerns are a great love of mine and they’re intrinsically bound, too. We were trying to make a Wolverine movie that was more based on the architecture of samurai and Western [films] and less so on the ‘will the world be saved?’ idea, which has been the architecture of the comic book movie for the last decade.

“If you watch a film like Dirty Harry, there’s a shooting and then Clint Eastwood shows up – you’re wondering who is he? Has his wife left him? Does he have kids? And then the movie just starts.” 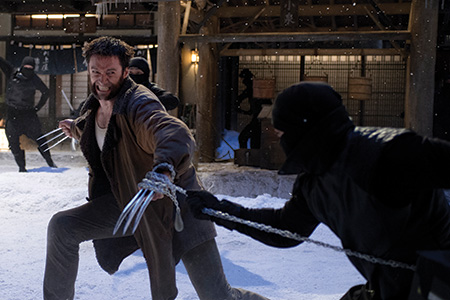 This was an approach Jackman wanted too and Mangold decided to drop the audience right into the action by facing Wolverine off against a Nagasaki-decimating A-bomb in an astounding opening sequence, then flashing forward to a Logan-gone-native in the Yukon, like a bearded Rambo running from his demons. Jackman, though, also wanted Wolverine’s primitive power to be better used than before.

“Hugh wanted more of a darkness and rage, and more of his fighting style – which just comes off as weird in the face of other mutants,” says Mangold.

“If you have characters that can make the clouds open and aircraft carriers rise, then ‘chink’ [of his blades] doesn’t seem so intense. Get Logan away from that, though, and suddenly he is much more badass and his physicality isn’t outscaled by the weather-changing, magnet-making universe surrounding him.”

Surround him with a load of blade-toting ninjas, honour-bound samurai and toxin-spouting mutant Viper, however, and it’s a whole other world in which Wolverine’s bite is put to the test and in which Jackman gets to show off all those man hours spent down the gym.

But despite having bulked up by hitting the weights and eating 6000 calories a day to play his signature role, embracing the darkness and rage took Jackman to places that scared him, and his wife, a little. 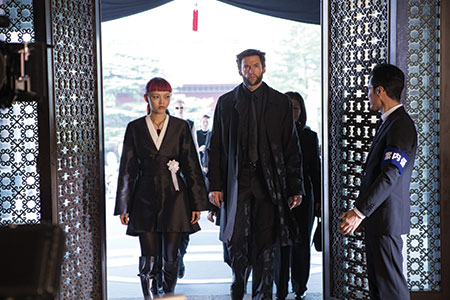 “In the film, there is a scene where I swing from the inside to the outside of a train and my neck got caught,” Jackman says of shooting a sequence set atop one of Tokyo’s 300mph-hitting bullet trains. “I thought I had broken it!”

The setpiece itself was one Mangold had dreamed up while riding the famous trains between scouting locations. “It is a well-worn action movie trope to have [people] fighting on the top of a train,” Mangold says.

“[But] never has it happened on top of a bullet train. You’re going 290-odd mph, as fast as a plane, and there are trains coming the other way only eight inches apart from each other which make a sonic boom as they pass – they are insane!”How did Jackman feel about putting his neck on the line, literally?

“It was one of those moments when my wife looked at me and said, ‘What are you doing? Enough playing in the schoolyard! You are not invincible!’”

This incident has not tamed Jackman’s love for the character, though. He’ll next be seen in the upcoming X-Men: Days Of Future Past which brings together the 2009 First Class movie with original X-Men cast (Ian McKellen, Patrick Stewart and Halle Berry) and director, Bryan Singer.

Jackman would also love to see his claw-brandisher team up with other superheroes, such as Spider-Man and Iron Man, in a multi-character smash-up that would bring together the X-Men with that other big screen comic book movie team, The Avengers.

“I said ‘man, can this happen?’,” Jackman told website Collider of his conversations with Tom [Cohen, Marvel VP of production] about the possibility of Twentieth Century Fox [who own X-Men and Fantastic Four] teaming up with Sony [Spider-Man] and Marvel [Iron Man, Thor, Captain America].

“He goes, ‘Look, it is not going to be easy because you’re working with different studios and they’re their properties.’ But I believe maybe … at some point. I find it impossible that there’s not a way to bring Iron Man, all The Avengers, Wolverine, the X-Men characters, Spider-Man, and somehow get them all together.”

“I don’t see the impediment,” Jackman adds. “I’m like OK, you’ve got three studios, just split it three ways in terms of the cost, and happy days, it’s all coming together,” he says with trademark Aussie pragmatism. “I’m in for it, I’m totally up for it!”

With The Wolverine out this week and …Future Past next summer, it seems that Jackman is going to make sure he does right by his growly screen buddy. Which means only good things for us. See P26 for our review of The Wolverine.

The Wolverine is out July 25 through Twentieth Century Fox.