The landscape-style garden complete with lush foliage, a waterfall and recorded bush frog sounds, was the first Australian entry to receive the top prize at the competition.

It’s been a personal challenge for Wes Fleming, owner of Fleming’s nurseries in Sydney who invested £1.2 million of his own money in order to scoop the world’s most prestigious horticulture prize.

Fleming told the Evening Standard only Best in Show would do for his ninth, and last, entry to the competition.

Fleming headed a team of 18 volunteers with Phil Johnson as his designer. “Being involved in Chelsea was a dream come true for myself and my team,” Johnson told The Australian. It was his first time entering the competition.

“Winning an award amongst contemporaries of this calibre is absolutely mind-blowing”. 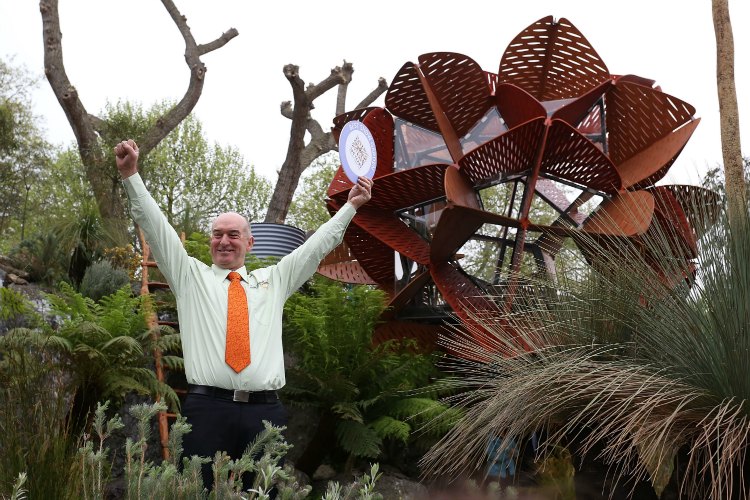 When the award was announced at 7.30 am this morning the team embraced in a group hug erupted into cheers and shed a tear or two.

One volunteer, Tim Wilkinson, even stripped down to his underwear and dived into the pool in the middle of the design.

The garden features an Australian lush gorge, and a large billabong fed by a number of small waterfalls. It is overlooked by a giant Waratah shaped sculpture made from aluminium and pine.

Talking to The Evening Standard, Chelsea judge Bob Sweet said: “Standards just keep going higher and higher —  even though two years ago we deliberately decided to make tougher the standard for winning a gold medal.”

Yesterday the Queen, the Duke of Edinburgh, Prince Charles and the Duchess of Cornwall toured the gardens.

The Secrets of Hogwarts: The Making of Harry Potter Tour