If you’ve not heard of Des Bishop, you’re probably not Irish. Thanks to some highly acclaimed TV shows, an obsessively loyal stand-up following and an inspired Irish translation of House of Pain’s “Jump Around”, the New York-bred funnyman has become one of Ireland’s most-loved faces. He now wants to conquer Oz. TNT caught up with him in a Melbourne bike shop…

How come you’re buying a bike?
Well, I’m here for the whole month. I think it’s a worthy investment. With this weather you just feel it’s a waste of time not cycling around. I have a kind of obsession with getting orientated with places. At this stage I feel like I could live here.

In Melbourne or Australia generally?
Well, truth be told, Sydney’s probably my preference. Melbourne’s a nicer city, but the beaches just tip it for me. The beaches are just fucking unbelievable. Either you’re hanging out on Tamarama or you’re getting the ferry to Manly, it’s just like you’re on holiday every day.

You mentioned Tamarama in your gig last time you were down here. Big fan yeah?
Haha yeah, without a shadow. ‘cos there was titties! I think I was probably joking about that. You came to the show? Did you feel like you’d entered into the Irish embassy?

Ha, yeah, think I was the only non-Irish in there. Did you expect that?
Ah, in Sydney I expected that. We did a good bit of press for that show but by the time all those articles came out the fucking thing was sold out. I knew that would have been the Irish. The Enmore Theatre, I’m doing this time, that’s big. I’ll need some Australians. Don’t get me wrong, I love playing to the Irish, but when I’m in Australia, I’d prefer advertising my wares to people who don’t know who I am.

You’re quite passionate about learning the Irish language. How come?
It’s about identity and belonging. There’s this kind of wall that gets put up when people are like, “no, you’re American”. There’s something amazing about language. It really is a passport into belonging. I wouldn’t have really realised that beforehand, because Irish people don’t really speak Irish. It was like now nobody can take my identity from me.

Did you feel you had to prove your identity more to Irish people because of your American upbringing?
I think it’s something inside myself. I don’t really care what they think. I still feel like an Irish American really, but Irish people don’t like the concept of Irish America, even though it’s essential. Ireland is a grain of sand in the global situation, it’s like a tiny smidgeon. It has no importance, but yet for some reason it punches above its weight internationally. Everyone cares about Ireland, and they do because of this massive diaspora of Irish people. So, even though Irish people deny Irish America and stuff, in real terms that is part of the Irish nation. Growing up Irish American, that was really profound for us, that’s what we were, that’s our identity.

Have you seen much else of Oz?
I went up to Cairns and I went around the Whitsundays. That was great. I was in Perth. The city itself is okay, but the hinterland is amazing. We always go down the Great Ocean Roadhere in Melbourne when we have days off. To be honest with you man, I love Australia. I could live here. I think Australia is a European person’s dream.

Why’s that?
I know it came at a cost, but putting that aside, for me it’s the fucking ideal culture. I’m a beach person, I’m an outdoors person. Everything about Australia suits me. The people, the women are sexy as fuck, everything. I love beach volleyball. I could live in Sydney. I would take an 80 per cent pay cut from the money I make in Ireland if I could just do the odd gig in Australia but play volleyball on the beach all day and get to know all those Brazilians that play volleyball down in Manly. Just make that my life. I would be happy.

Sounds like you’re planning a return?
I’m gonna try and come back in September, find a small venue and do a run of like two weeks so I can just chill and do one of those courses where they teach beach volleyball.

I’ll learn the code and get into it.

Well, good luck with the plan Des.
Thanks a million bro.

Des is playing five shows a week at Melbourne Comedy Festival from now until April 26 (www.ticketmaster.com.au) and then Sydney’s Enmore Theatre on April 28 (www.ticketek.com.au). 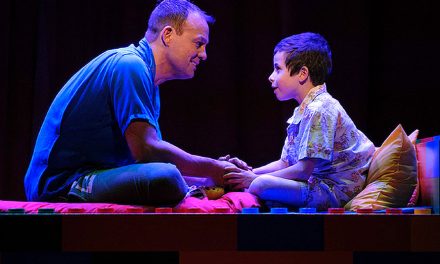