Theatre Review: On the Town

Director Drew McOnie has created his own choreography (inspired by Jerome Robbins’ original work) in this new production of Leonard Bernstein’s flimsily plotted 1944 wartime musical (book and lyrics by Betty Comden and Adolph Green) in which the women are more predatory than the men and an underlying sense of possibly limited time breaks through the vibrant movement – nowhere more so than in a silent danced encounter (the Lonely Town pas de deux) between two men. 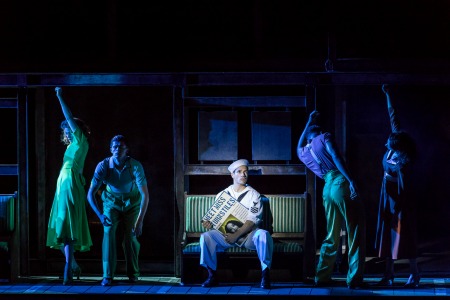 Most of the time, though, this is a joyous, colourful affair – the young tars’ bell-bottomed uniforms sparkling white, the city girls in bright frocks as Gabey (Strictly finalist Danny Mac) enlists his friends’ help in tracking down the girl he spotted on a subway poster – newcomer Siena Kelly’s Ivy, the outgoing Miss Turnstiles. Organised Chip (a likeable Jacob Maynard stepping confidently into the role) would rather see the sights, but gets hijacked by Lizzy Connolly’s peroxide blonde, man-eating taxi driver Hildy, whilst Samuel Edwards’ Ozzie  links up with  anthropologist Claire (excellent Miriam-Teak Lee revealing a gorgeous voice in her professional debut)  who continually runs rings round her staid middle-aged fiancé.

Maggie Steed’s gruff, whisky-swigging singing teacher adds to the comedy, but it’s the dance that really makes this show – with the girls leading the way in a musical which is all about living for the moment in uncertain times.