Kicked out of his rock band just before The Battle of the Bands competition, flabby, slobbish Dewey Finn desperately needs cash. He owes rent to his old friend Ned Schneebly whose girlfriend has run out of patience. So when Dewey takes a call offering Ned a lucrative substitute teacher post at the prestigious Horace Green prep school, he turns up instead, heavily hungover and with no intention of teaching anything – until he discovers the musical talent of these serious, Harvard-heading pupils and turns them into a rock band. 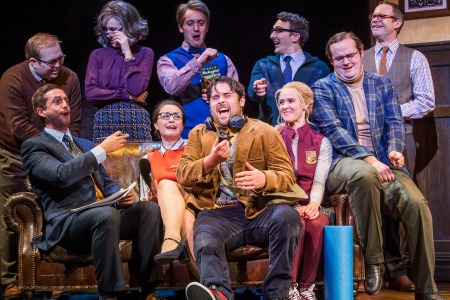 The kids are all fantastic (there are three rotating sets, all playing live and all under 14) including (on the night I went) Lois Jenkins’ diminutive Katie – barely bigger than the cello she starts off with or the bass guitar she’s switched to, Tom Abisgold’s Zack rocking it on lead guitar, Jude Harper-Wrobel bashing it out on drums, and James Lawson’s Lawrence finding his cool on keyboards.

The lead adults are pretty good too, with Florence Andrews’ strict head mistress rediscovering her inner rock chic and wondering “Where Did the Rock Go?” and, at the high energy centre of it all, telling them to “Stick It To The Man,” David Fynn’s anarchic, irresponsible, irrepressible Dewey empowering his young charges in a way their pushy parents demonstrably fail to do.

Top of the class Summer needn’t worry – there are gold stars aplenty for all involved in this exuberant new show.