Find out what really goes on behind the scenes in parliament in James Graham’s witty, fast-paced and impressively researched THIS HOUSE. A well-deserved hit at the National Theatre in 2012 this political comedy takes us into the heart of The Palace of Westminster where the chief whips muster vital votes for every crucial bill and no one is allowed to die on the premises. 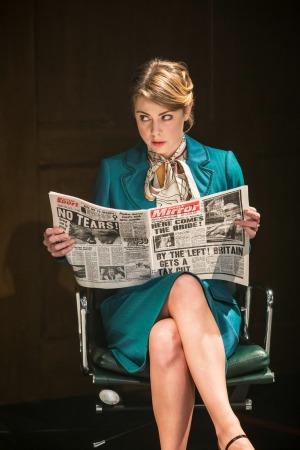 It’s 1974, the Tories have been ousted and Labour has squeaked in – but without a working majority to keep them safely in charge for the next five years.  By chance, I was seated next to a Labour MP (now elevated to the House of Lords) who was campaigning at the time. She easily recognised the characters portrayed and confirmed the authenticity of Jeremy Herrin’s deft production. The closet machinations, the dedication to the cause, and the desperation to stay in control with a hung parliament are vividly conveyed as the whips turf Members out of toilets and summon them from sick beds. The stakes are high when success or failure can hinge on a single vote, and this ensemble piece keeps up the tension as death, illness, a faked suicide and a rejected gentleman’s agreement all threaten to shift the balance of power. Don’t miss it.

Hack your way to a happy holiday