The man regarded by many as the best left back in world football is still loathed by Arsenal fans who believe Cole’s switch to crosstown rivals Chelsea was an act of betrayal.

Cole responded by retweeting a picture of his trophy count since he joined Chelsea versus the silverware won by Arsenal during the same period.

Perhaps unsurprisingly this unleashed another torrent of vitriol, which to Cole’s credit, he largely didn’t rise to. 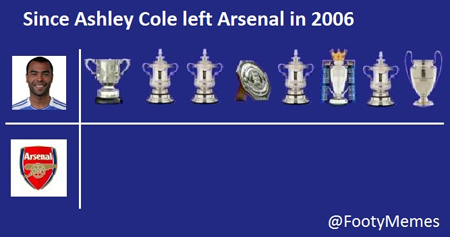 tut tut tut, love to give it out but cant take it when the truth is told, babies!!!! thought people on here had sense of humour!!!!!

look, im not dissing arsenal, or the fans, i had many great years with the club, and have respect for you all, but dont all get upset,

“I’m NOT a huge fan of yours I think you are a cheating rat and a bellend! Retweet please! Ha,” tweeted Kelly from Cheshire.

The abuse Cole responded to in turn lead to a torrent of positive tweets from Cole’s fans.

@TheRealAC3 England’s most underrated player of the past decade. Ignore the haters. You’re a great player and I’m a United fan!!

More cold weather for the UK

Kasper key is to adapt for Oz v India