The Adelaide 32-year-old put to bed a 77-year hoodoo in a gripping final day which included countryman Jason Day also in the hunt for much of the round before he faltered on the final holes.

Scott, however, was rock solid. And after Cabrera narrowly missed his birdie putt, he used his long putter to full effect to take the victory.

Scott paid tribute to his hero Greg Norman, who paved the way for many young Aussie golfers on the international stage but so famously capitulated on this stage.

“There was one guy who inspired a nation of golfers and that’s Greg Norman … and part of this belongs to him,” Scott said. 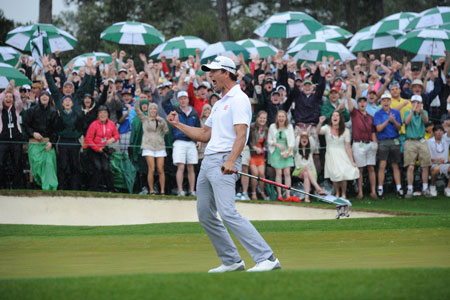 “I don’t know how that happens, It seems a long way from a couple of years ago here (when he finished tied for second) and last July when I was trying to win the British Open,” Scott said.

“It fell my way, I had some luck somewhere. I don’t know how to express it.”

Norman tweeted how proud he was of Scott.

“What happened today I observed in the eyes of Adam when he was 15. He deserves everything he gets from this win,” he said.

Day finished third ahead of another Aussie, Marc Leishman, who tied for fourth with Tiger Woods.

15th July set to be the hottest day of the year