The Air France jet which crashed on a flight from Rio de Janeiro in 2009 took a full three and a half minutes to plunge into the Atlantic after the engine stalled. 288 people on board the Air France flight died after the plane hit the ocean at the speed of 180 feet a second after a terrifying three-minute plummet from the sky.

Flight 447 malfunctioned in a heavy storm en route from Rio, killing everyone on board.

France’s accident investigation office, the Bureau d’Enquêtes et d’Analyses revealed that the pilot was on a break when engines of the Air France jet began to fail.  Co-pilots battled to keep the flight in the air but the engines stalled and Flight 477 plummeted into the Atlantic Ocean. 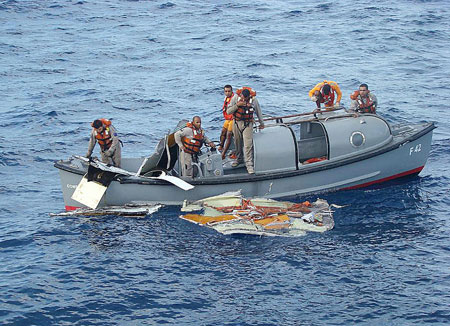 Crew members of a Brazilian Frigate recover debris from Air France flight 447 on on June 7, 2009.

According to reports, pilot Marc Dubois had been taking a break when a co-pilot reported heavy turbulence and told passengers to fasten their seatbelts.

Less than two minutes after the autopilot cut out Dubois returned to the cockpit. However it appears that he did not resume control of the plane, leaving the flying to his co-pilots.

The junior pilot tried to fly above the growing storm, but the Air France flight began to plunge towards the ocean.

As alarms went off due to the plane’s stalled engine, Flight 477 crashed into the ocean, killing all aboard.

A principal theory for the cause of the crash is that the jet’s speed probes iced up, resulting in faulty data and setting off the chain of disastrous events.

Air France and Airbus is facing manslaughter charges following the crash, and an investigation led by Paris judges is under way.

The wreckage of the plane – including the black boxes – was discovered two-and-a-half miles under the sea after a search of 10,000 sq km of sea floor.