Alternative Auckland: After bungy jumps and bars, what else is there?

Stay with me, I’m going somewhere with this. Like the Red Light District (and its workers), Auckland spreads itself far and wide and when visitors arrive in both they tend to get stuck in the one place, neglecting to explore the beauty, culture and history of the surrounding areas.

However, Auckland’s beauty, unlike the ‘beauty’ of the District’s, is not skin deep. (For the sake of my love life, I’d like to categorically state that unlike the Red Light District, I don’t believe 90 per cent of Auckland’s female workers are ladies of the night – nor are you likely to leave Auckland with a debilitating sexual disease.)

The point is, after taking advantage of Auckland for its nightlife, pubs and the many chances to throw myself off tall buildings, I wanted a little more. I decided to explore the surrounding areas.

Despite the seemingly obvious pitfalls of building a city within a bosom of volcanoes (surely Dante’s Peak should be on their curriculum?), Auckland is snuggled cosily within a radius of approximately 50 volcanic vents. 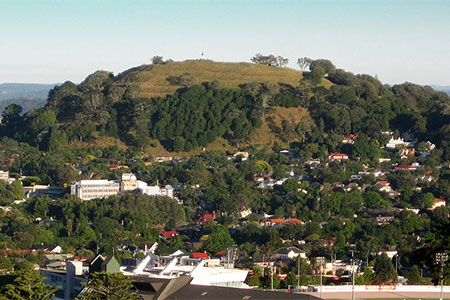 However, what Auckland’s town planners lack in common sense the city makes up for in great scenery. Several of these mountainous uprisings are worth visiting. One Tree Hill and Mount Eden (above) are two nearby mounds, both offering great views, only a few minutes from the city.

A quick bus ride takes you straight into the countryside, where you’ll see sheep, flora and more sheep. For a cheap way to see the natural beauty of Auckland’s sprawling city, come up here for a sunset and watch the sun slowly set into the water’s edge. It’s stunning. 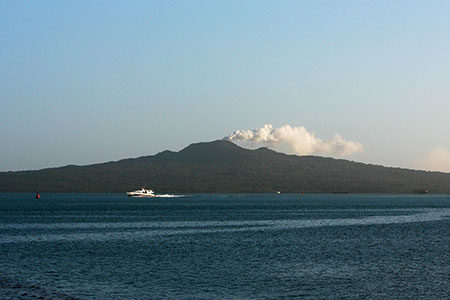 To truly appreciate Auckland though, you have to head off the mainland and onto its surrounding islands. Rangitoto is Auckland’s most recent volcano, barely 600 years young, and its size, symmetry and dominance over the entrance to the harbour make it one of Auckland’s most iconic landmarks.

A short ferry ride over and you’re faced with a land that time forgot (the average age of my tour group withstanding). Upon landing, the docking area emits a friendly, “We’re- all-going-on-a-summer-holiday” buzz, with colourfully painted huts dotted along the wharf’s edge.

Many Auckland natives decided to build their own “baches”, in the style of holiday beach huts, and live out their days on the island.

Upon further inspection though, the looming green mountain behind is ominously reminiscent of Lost. The strangest, yet most appealing thing, is the complete and utter lack of noise. Due to the acidity of the soil, very few birds and insects inhabit the island.

We’re shown some lava caves, natural passages formed when lava spewed from the volcano. Indulging my inner five year old, I quickly found myself scrambling into a dark, narrow entrance.

I was soon rewarded with an astounding view as the tight passage opened up and light streamed through an overhead hole, vines and grass hung down from overhead. If you ever wanted to live the Indiana Jones dream, come to Rangitoto.

On a sunny day, the Photoshop perfect views make the uphill slog worthwhile. 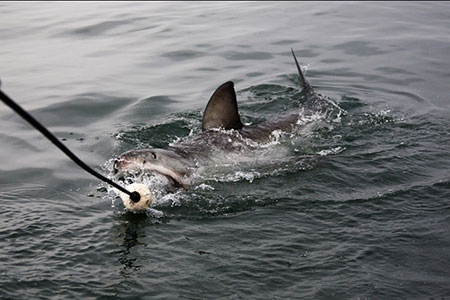 The next closest inhabitable Island is Waiheke. Locals talk about how much the place has changed in the last 10 years, with tales of a bourgeois elite battling with hippies and backpackers to stake their claim on a treasured piece of land. Yet it’s barely touched by commercialisation and wonderfully reminiscent of a Mediterranean getaway.

The approach to the island itself has a whiff of Narnia to it. Birds flew by the side of the boat singing, and as the ferry slowly turned into the harbour, the sun made the whole place sparkle. Having said that, if it’s pissing it down and grey when you arrive, don’t blame me.

In a bid to fully immerse myself in Waiheke’s peaceful ambience, I threw caution to the wind and booked on to a charter fishing trip in the Hauraki Gulf.

Bearing in mind that the closest I’ve ever got to catching fish was winning a goldfish at the local fair, I wasn’t holding out
much hope.

Obscenely early in the morning, after a beautiful sunrise and brief reassuring talk that “only a few” Great Whites are seen, I was given a crash course in fishing technique, and handed my rod.

Within minutes I was catching fish bigger than my head, and by the end of the day I’d proudly caught a few snapper’s, some yellowtail and… a shark. With the Captain gutting and filleting the fish then and there, you leave the boat with fish in hand, ready to be cooked. 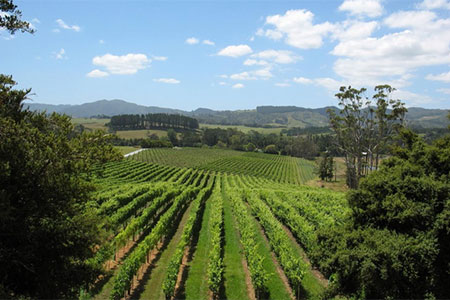 Better still, Waiheke is home to over 30 wineries, so if fish isn’t your thing, you can merrily wile your afternoons away with delectable wines.

It’s these moments that make you feel alive again, making all of those drunken nights with Peruvian midgets, goats and wet t-shirt competitions seem trivial.

Actually, no. It’s great whichever way you look at it.

The damage & the details: Ferries to Rangitito go three times a day from the downtown ferry terminal and cost $20 return; ferries to Waiheke Island go at least once an hour from Pier Two and cost $28.50 return; for info, Ph: 09 367 9111, www.fullers.co.nz; fishing trips with MV Verona Charters cost $60 for a day trip. 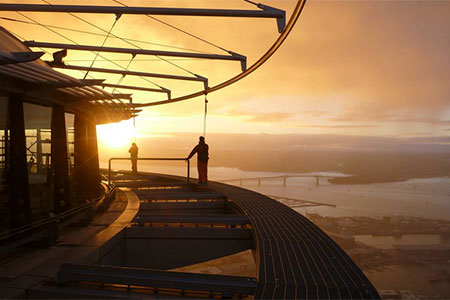 But if you still need to get your rocks off, try the Sky Jump…

With nipples harder than a Chuck Norris/Mr T fight-off and gale force winds whipping round my face, I began to realise quite how high up 192m/630ft really is.

Welcome to Auckland’s Sky Tower; the tallest structure in the southern hemisphere and home to New Zealand’s highest jump, a base jump by wire which offers a more gentle introduction to extreme sports.

While you still get that “I probably should have worn huggies” feeling as you peer over the edge and the exhilarating adrenalin rush as you fall, the fact that the wire is attached to your back instead of your feet means the descent is far less jolting, but just as enjoyable.

Alternatively, you could try the Skywalk; a guided stroll around the outside of the Sky Tower.

With no siderails, a path 1.2m wide and continual encouragement to lean back or forward over the edge (hands-free), it’s a brilliant addition that’s thrilling, informative (your guide points out geological and historical landmarks as you get a 360° view of the ocean and city) and makes you feel like a movie star, with diners from the Tower restaurant pointing and gasping as you lean over the side.

Three of the best tapas restaurants in London