Michael Clarke will have known this when he won the toss for the first time in the series and batted yesterday and, being a cricket tragic, will likely have considered it when he went to sleep on 125 not out, job half done in his mind.

When Bradman’s side won back then, he scored two double tonnes and a single. Clarke is no stranger to massive scores, but what he’s already done was considered that by his opener Chris Rogers.

After scoring his highest Test score of 84, Rogers dubbed his skipper’s performance as “massive for us’ as Australia went to stumps 3-303.

“For him to get big runs is massive for us – if he scores runs it makes it easier,” Rogers said. “We need him scoring runs because a lot of the guys are still learning.” 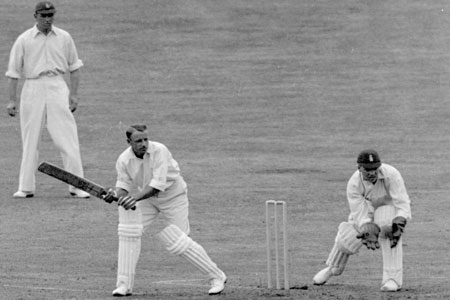 Rogers almost matched the total runs of his Test career so far as he laid a foundation for Australia with an uncharacteristically aggressive innings.

He reached his 50 with the total on 70 and the usually fast scoring Shane Watson playing the support role.

“As a batting side we’ve been under a lot of pressure and copped a lot of criticism,” he said.

“But the pressure was off us a little bit and we could go out and play with a bit more freedom and it worked out much better for us.

“I needed a couple of days after the last Test to deal with the criticism. To have guys you respect criticising you, and justifiably so, it hurts. But it strengthens your resolve.”