Australia reached lunch on 92-2, following a stunning 50 from Chris Rogers and a baffling referral decision which saw Usman Khawaja unjustly given out.

Chris Rogers looked superb from the first ball he faced, playing positively and moving his feet superbly. The left-hander raced to 50 off just 49 balls reaching his half-ton with consecutive fours off Jimmy Anderson.

Stuart Broad thought he trapped Rogers lbw early on, but the ball was sailing over middle and leg.

Watson, at the other end, seemed content to leave anything remotely threatening and slash anything loose to the ropes.

This policy served him well until he prodded at a nothing ball from Tim Bresnan that was comfortably wide of off. The ball swung just enough to find the outside edge and float, almost dutifully, to Cook at first slip who took the most simple catch of the series. 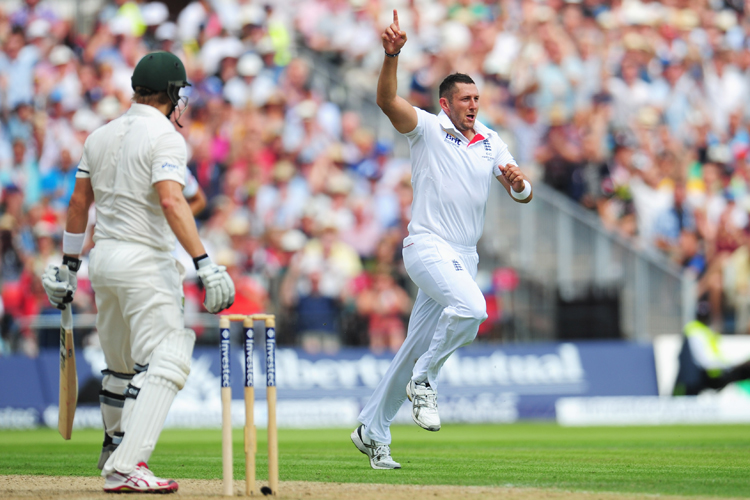 Rogers brought up his 20,000 first class runs shortly thereafter and, in a bid to stymie that stat, Alastair Cook brought Graeme Swann into the attack.

Swann looked to have trapped Usman Khawaja lbw after Australia’s number three mossied down the track to one, but the ball may have moved down leg.

But the Aussie number three was heading back to the hutch seconds later after he was given out for an edge from Swann.

The batsman referred the decision: hotspot showed no knick, there was a noise on stump mic but it appeared to be the bat hitting the pad. However the third umpire didn’t feel he had found conclusive evidence to overturn the on-field decision.

Snicko, which isn’t part of the third umpire’s arsenal of technology, showed that there was no noise as the ball passed the edge.

Australian captain Michael Clarke was brought to the crease just before lunch.

Australia will be frustrated at the interval that they haven’t been able to capitalise fully on their impressive start. They killed off the swing of the new ball before giving away one soft wicket and being done out of another.

The gift of giving – volunteer in London