Australia mopped up England’s tail in the second session of the day.

Matt Prior fell top edging off the bowling of James Faulkner, holing out to Mitchell Starc at long-on.

Jimmy Anderson sloped out of the changing room, edged a streaky four, then edged one through to Brad Haddin.

Graeme Swann’s entertaining waft came to a close after his middle stump was unearthed by one that nipped back from Faulkner, who notched his fourth wicket to leave England all-out on 377.

Michael Clarke then showed the kind of forward-thinking captaincy that has kept his team in touch with England throughout the series, changing his batting order beyond recognition to go for a bash. 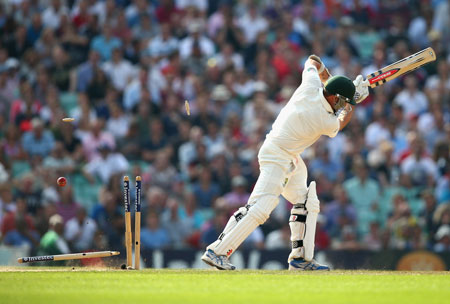 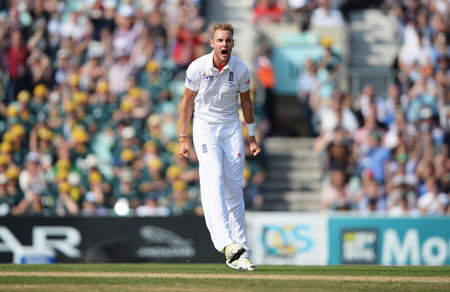 Jimmy Anderson had David Warner caught and bowled when Australia were on 34, diving to his right to take a beautiful catch.

Shane Watson, opening himself up was caught by Kevin Pietersen off Swann for 26, before Haddin edged through from Broad for a duck.

Faulkner came in and blasted 22 off 22 deliveries before falling to Broad, caught behind.

Steve Smith and Ryan Harris tried to get a conga line going, falling in quick succession, both falling to Broad, caught by Swann and bowled respectively.

Mitchell Starc and Michael Clarke batted out the session to tea finishing 101-6.

It’s great captaincy from Clarke, who has looked to make a game of the situation, knowing that England will not want to block out the final session after the third day’s criticism.

The Sun the Surf and the Sand!