Ashes 2013: OFF STUMPED – Inept Aussies need to apply pressure or they’ll bleed out

A lack of application with the bat and ill-discipline at times with the ball – mainly the batting thing though – made the English look like they were throwing grenades.

Attempts from these quarters to maintain optimism has pretty much run dry, and now it’s time for some proper ‘have a good hard look at yourselves’ action.

Now they face the very real possibility of a 5-0 series whitewash.

Two massive problems – but not the only ones – are entire players who simply aren’t fit for the jobs they’re supposed to do.

Shane Watson is a one dimensional batsman who’s awesome at one-dayers and T20s, but as soon as the ball gets a bit soft and a guy pins him on his stumps, he’s gone and Australia’s on the backfoot from the get-go.

To have played 79 innings and have an average under 35, and to have scored only two hundreds (he’s got 19 fifties), is piss-weak by Test batting standards and certainly not good enough for the Aussie team.

More worrying for experts is he gets out a third of the time the same way, LBW, which means he’s been found out – evolve or perish.

The problem is the guy is an all-rounder, one of the most reliable bowlers poor Michael Clarke has at his disposal because he can bowl to a plan and to his field, and he swings it.

But he’s not justifying his position as a batsman. The fear in sending him down the order is that he needs the hard ball to score runs because he struggles turning the strike over when spinners are on – well that’s a problem he needs to sort out before he’s shipped out.

Add to that he doesn’t appear all that popular, and that there’s two other openers in the quad, and the solution may be a simple one. 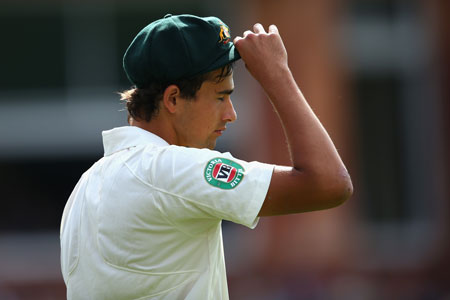 The next one isn’t popular thing to say but is blatantly obvious after the second test – Ashton Agar is not a Test bowler, yet.

Two wickets for 248 runs off 504 balls in two matches is not going to cut it.

It’s not even that he didn’t take wickets, or really trouble the English batsmen, it’s the fact that he bowls so many loose ‘four balls’ that any pressure built at the other end by a Siddle or Watson is gone.

It leaves a guy like Joe Root cruising along to 100 runs off a million balls cause he knows there’s a time coming where he’ll cash in.

Agar’s 98 in the first innings at Trent Bridge was an awesome story, and he handled himself well, better than the batsmen. But the fact is the guy was stumped on six – how the tale would have turned from tight test to a flogging – and he was under zero pressure. At least zero expectations. He played freely, played his shots, and fortune favoured the naive.

Of all the most important elements of cricket, pressure is possibly the greatest of them all, especially when it comes to taking wickets.

Pressure can be exerted through tight bowling forcing a batsman to take risks, attacking/defensive fielding positions (depending on what you’re trying to make them do) or, and here’s a wacky one for the Aussies, by having runs on the board.

England did all of these things brilliantly at Lord’s. Alastair Cook’s only hard decision of the match was when to stop batting, and he based that entirely on giving his young opening partner a shot at a double-tonne.

Michael Clarke’s brain must be as exhausted as his back from standing out in the field, such was the regularity of the decisions he was forced to make due to ineptitude.

All of this gloom does have an upside though, it makes the plan for the third test at Old Trafford in 10 days simple – the Aussies need to score more runs and bowl better.

That’s not too much to ask is it?

Aussies to be allowed to watch BBC for £54 per year

Our view: Page 3 girls, Kate Middleton and the war on boobs