Essex smashed Notts by 47 runs in the quarter final after setting the visitors 188 to win, featuring an impressive innings of 82 from Dutch international Ryan ten Doeschate.

While Alex Hales made a crushing start with 31 off 12 balls, three wickets from David Masters saw Notts slip to 4-64.

Not even a typical David Hussey innings of 61 from 37 balls could make the difference when slinger Tait came to the party.

After a solid start, a few quicks wickets saw the Essex total slipping away from Notts, aided in no short part by tight work from bowles Tait, David Masters, Reece Topley and Ten Doeschate.

Hussey launched a rescue mission, but when Matt Wessells was removed by some slick fielding, the Tait show began.

He had Hussey, who’d been dropped twice, caught by Ten Doeschate.

He then took care of Ian Butler, caught by Greg Smith and then needed no help with Graeme White’s wicket, ripping through the stumps. 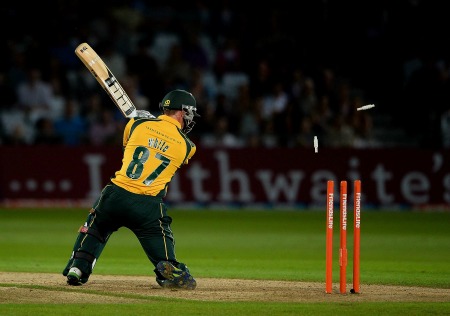 Essex’s win means the top three teams in the southern group will play in the semis for a spot in the final at Edgbaston on Saturday, August 17.

They join Surrey, Hampshire and Northants.

Rubbed the wrong way: Man arrested after breaking into woman’s apartment and giving her a back rub