The most powerful cyclone in Australia’s history – Cyclone Yasi – is sweeping towards the coastline and is expected to make contact today. Tens of thousands of Australians have been evacuated from Queensland.

Cyclone Yasi is a maximum category 5 storm and if it continues with its current strength when it reaches Australia’s coast it will be the strongest cyclone to hit Queensland since 1899, said Alan Sharp of the Australian Bureau of Meteorology.

The cyclone is now within hours of hitting landfall in northern Queensland and seems to be heading for densely populated areas, including Cairns, Townsville and Mackay, home to more than 400,000 people.

Police have been turning people away from shelters which are already full as people panic after engineers warned that even “cyclone proof” homes could be blown apart by winds expected to reach 300km (186 miles) per hour.

Satellite images show Cyclone Yasi covering an area bigger than Italy or New Zealand and the timing – just after high tide – also brings the possibility of 6.5 feet (two meters) storm surges that could flood significant areas along the coast.

“This impact is likely to be more life-threatening than any experienced during recent generations,” the Bureau of Meteorology said.

“What it all adds up to is a very frightening time,” state premier Bligh said.

“We’re looking at 24 hours of quite terrifying winds, torrential rain, likely loss of electricity and mobile phones. People really need to be preparing mentally if nothing else.”

Thousands of Queensland residents as well as tourists have taken shelter in evacuation centres and makeshift shelters. 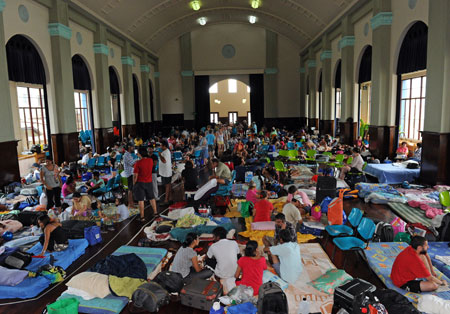 The annual La Nina weather system is known to bring floods and an increase in cyclones during the Australian storm season from November to April.

However this year record ocean temperatures and an intense La Nina have contributed to the monster cyclone.

“Yasi is not enormously unusual but it is at the top-end of the scale as far size goes as well as intensity,” Sharp told Reuters.