Michael Clarke’s side secured a 49-run win to take a 2-1 victory in the best of five series, after two matches were lost to rain.

After an up and down Test series, Watson bludgeoned England patchy attack to all parts of the Ageas Bowl with his 143 from 107 balls, including 12 fours and six sixes.

After reaching his hundred, Watson took a liking to Joe Root’s gentle off-spinners.

A single over from the Test opening batsman went for 28 runs, the most expensive over ever for an England bowler, and that included the first ball of it being a miserly single from James Faulkner to get Watto on strike.

Captain Clarke made 75 despite being under an injury cloud before the match.

The pair amassed 163 for the fourth wicket, after the makeshift top order failed to do any damage, collapsing after a brief rain delay.

England could only reach 249 in reply to give Australia something to celebrate ahead of a seven-match ODI series in India before the return Ashes series in Australia.

The mammoth knock was Watson’s eighth ODI hundred and saw him pass 5000 runs in the format. 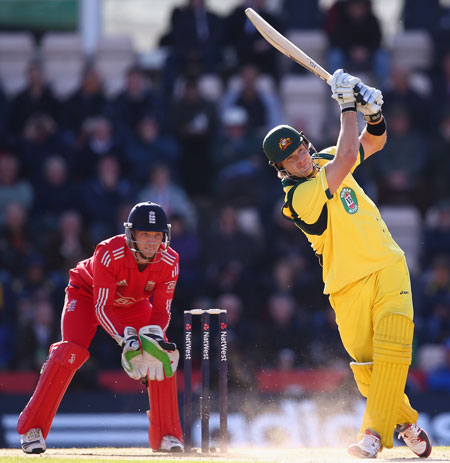 After failures in the Champions Trophy and a 3-0 loss in the Ashes, Australia has turned around their fortunes with a 1-1 series result in the Twenty20 series and an ODI series win.

While the English have already said it’s no amends for their Ashes flogging, Watson will certainly take it.

“We had not had much success on this tour so far.”

“Things have changed quite a bit but the most important thing is that everybody is enjoying themselves.

At the start of the tour we were not enjoying ourselves.

“We wanted things to change in a big way and for us to be more consistent. Everybody is excited.”

Clarke said the series win was reward for all the hard work put in by the team before and after Mickey Arthur was replaced by Darren Lehmann just before the first Ashes Test.

“We have worked extremely hard and this is a nice reward,” Clarke said.”I hope we put a smile on the faces of the Australian people watching us.

“It is about continuing to perform for this team. We want to be the number one one-day team in the world.”

Give us a giggle: Ronny Chieng on his latest show The Ron Way and that time he was a spiritual guide cat