Best beaches in the UK

Ok maybe I’m exaggerating a bit but there’s still plenty to do from sailing to fishing to crab catching. Here’s a list of Britain’s most charming beaches.

One of the most stunning beaches in the UK is without a doubt Porthcurno. Spread out on the Atlantic coast of the most westerly bit of Cornwall, Porthcurno is famous for its secluded beach, stunning cliffs, beautiful white sea shell sand and translucent water. Not far is the Parish of St Levan and Land’s End, Britain’s most westernly point, where you can find everything that meets your fancy from pubs and restaurants to beautiful cottages and b&bs.

Located between England and Wales, this is the largest island in the Bristol Channel and is voted one of the top ten British wonders. The population makes up a massive 28 people and there is hardly anything on the island but a pub, a shop and a few darn good beaches.. It’s very popular with climbers and there are plenty of good crags on the cliffs with a few bolted routes but mostly trad. Scrambles are quite long and steep so good shoes are of upmost importance.

A big open space with lots of beautiful rocks, the Gower has brilliant surf, historic landmarks, caves, dramatic cliff tops, treks, panoramic views and stunning unspoiled beaches. Pretty bloody good! The campsites are cheap and a must during the summer. Very popular with surfers and climbers.

This stunning shingle beach lies just north of beautiful Hull. It’s perfect for sailing, relaxing and taking in the stunning Flamborough chalk cliffs. There are plenty of B&B’s, camp sites and even farms where you can stay and get some work.

It may be called Burntisland but it sure ain’t hot. During the 16th Century it used to be called Green Island but then it set on fire hence the name. There are some beautiful beaches overlooking Firth of Forth on the east end of Burntisland where visitors can chill in rock pools (not unlike those found in and around Bondi), enjoy the beautiful promenade and seaside park and of course, let’s not forget the breathtaking fairground and array of bouncy castles. This is the British seaside at its best.

This list would not be complete without Pembrokeshire. From Saundersfoot all the way up to St Davids and all the nooks and crannies in between, this area of coast line has to be one of the most sterling in the UK. The most protruding part of south Wales covers a 40 mile area and the best way to get around is using the train, unless of course you have a car. Saudersfoot and Tenby are well known for summer holidaying. Their picturesque fishing harbours, quaint painted houses and plenty of crags attract visitors all year round. You can throw a line out of the rocks or even go on a wee boat trip for a few quid. If you’re feeling really adventurous then you can catch a ferry all the way to Ireland. The beaches are perfect for sandcastle building, soaking in rock pools, picking fresh mussels for dinner and you can even have fights with some giant crabs though you’ll probably lose to the nasty mothers!

Travel further up the coast to visit the historic town of St. Davids – a quiet little spot with plenty of sightseeing, bird watching, dolphin and seal spotting. It’s most famous for its adventure activities including climbing, surfing and the best hangover cure — coast-steering. There are also plenty of charismatic little pubs to help you acquire this. You can even sleep in a lighthouse if you’re into that kind of thing. 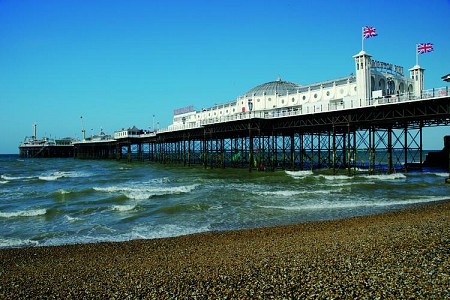 Not much of a swimming beach because the water is usually brown but the pebbles offer a great space to socialise, barbeque and make friends with much of Brighton’s crazy hippie youth. You’ll find lots of nearby gigs, art events and shopping. Don’t forget to try the beautiful cockles and oysters for guaranteed food poisoning. Visit the Penny Arcade for some unusual satisfaction or gamble away on the one and only remaining pier. If all else fails, treat yourself to a portion of fish and chips while you play crazy golf or ride the mini railway to the marina for some cheap pints at the ‘spoons.

OK so maybe not the closest beach to London but still an award winning beach for its cleanliness and dune conservation area. Enjoy two kilometres of scenic walks, local flora and fauna and hectares and hectares of sand dunes. Swimming is only safe during summer months when there is a lifeguard on the look out. Tyrella is a wide, flat sandy beach that is said to be one of the cleanest beaches in the world. No wonder, it’s too bloody cold for anyone to go! Good for kite/wind surfing, sailing and canoeing. To be sure, this really is the pot of gold under the rainbow.

Olympics could end up costing the taxpayer £11 billion