Of course we don’t believe Paul Walker’s former copper Brian O’Conner and Dominic Toretto (Vin Diesel) when they agree their old life is behind them as Jordana Brewster’s Mia (Dom’s sister) is about to have Brian’s baby. That would make a seriously shit film.

Soon, in rolls The Rock (or in this case Special Agent Luke Hobbs, but basically The Rock) to their hideout in the Canary Island (not that they were hiding) with an offer Dom can’t refuse.

While he’d settled with a new hottie (Elsa Pataky in this case), Hobbs gives him a chance to bring his soulmate Letty (Michelle Rodriguez), back to their “family”.

Hobbs has photos of her in cahoots with master crook Owen Shaw (Luke Evans) and wants Dom and his crew of automotively gifted loons to help him take down the evil bugger. 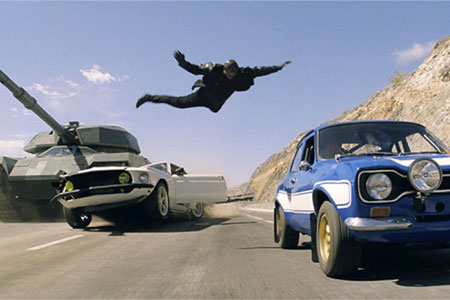 Enough of the boring stuff though, after the franchise faltered from two to four, six is much like Fast 5 in the ass-kicking stakes.

The Rock seemed like an overload of muscle initially, but his double act with Diesel gives action movie awesomeness a NOS injection.

It totally delivers on the vehicular warfare, as promised, and then some, with the main final set piece one of the cooler sequences involving cars, a plane and stack of people fighting each other you’ll see.

And don’t go for a leak when you see a bridge, lots of cars and I can say it cause it’s in the trailor, a freakin’ tank!

The bare-knuckle action is impressive too, especially Rodriguez and newbie Gina Carano – whose entire back story is described by her partner The Rock in one introductory sentence at the scene of a terrorist attack in Moscow. When the tough tough ladies of the film clash on more than one occasion, you wonder if their moves would bring down their behemoth male counterparts.

As a villain Shaw’s motivation isn’t all that clear other than the fact he’s a nasty prick, even better at doing cars than we’ve seen before. His bespoke F1-looking ramp contraption is all business and no party for anyone. He basically wants a chip worth billions that could render entire countries communicationless for a day, which would be bad. 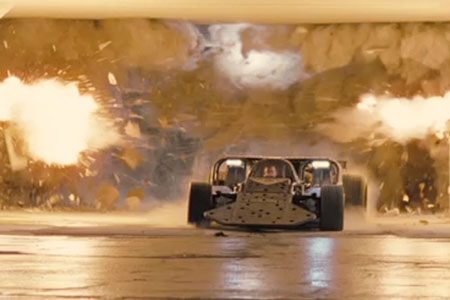 Problem with Toretto’s super crew (which includes members from each sequel) and the might of Hobbs’ officials though, is they seem to track him down a bit too easy. This means a few moments of, “Why don’t you just shoot him?” But again, that would make a shit movie.

Being the home of Interpol, an unfortunate victim of a clever “come over here while I blow that up” move from Shaw, London also plays a significant part.

If a couple of sequences were real, we sure wouldn’t be getting to work on time tomorrow, but it really could have been anywhere save for the landmarks. 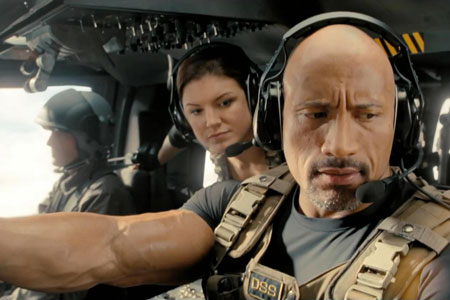 One street racing scene is a nod to the origin of the franchise, and looks superbly bad hip-hop video tacky – I’m sure there’s more blokes than girls in bikinis at these things (letters@tntmagazine.com if you can shed some light on this, with images please).

Soon we’re chasing the baddies in Spain, with muscle cars and sporty numbers and god knows how many millions smashing them up for our entertainment pleasure.

Have a guess how it ends? You can bet it’ll be with a cheer and a feeling of a rare ticket that’s well worth the outlay to see it on the big screen.