Big Trip: Riding off with the fairies in Cappadocia, Turkey

This sandy nature-built rock bridge can’t be wider than my horse. So how the hell am I supposed to ride across it? I’ve just passed halfway of a horse trek in Cappadocia in Turkey’s Central Anatolia. There’s no option to chicken out, but the pants-wetting several-storey drop either side of the path I’m being led down is the first time I haven’t been marvelling at the other-worldly landscape. I just have to remember the advice I was given by rancher Ekrem Ilhan (a Turkish Robert Redford, basically): “If you just sit on the horse you’ll be fine.”

The valleys, peaks and quirky lumps of Cappadocia are unlike anywhere. Coming into the region from Kayseri Airport, it’s moon-like – sparse in different greys and a lighter shade of Mars. Then as I arrive at the region’s largest town, Ürgüp, where I’m staying, the horizon’s filled by honeycombed rocks. Many are homes, and have been for centuries, or hotels such as the small and serene Serinn House, the modernised caves I’ll call home.

But it’s the ‘fairy chimneys’ which really set this part of the world apart. These unique figures, my guide Atakan ‘Ata’ Ceyhan tells me, formed after a series of eruptions from three surrounding volcanoes, each bathing the valley in a new layer of lava that became stone of varied colours and density. Then, over thousands of years, they were carved by the wind and water into the rocky rainbow landscape we see today and in films such as Nic Cage’s Ghost Rider (Ata was the star’s guide). The hard black layer on top erodes slower than the layers it pins down, giving the chimneys a mushroomy cap. Or if you prefer legends to science, early settlers here around the period of the Stone Age thought “they were the chimneys of fairies living under the ground”. Now that’s much more fitting. 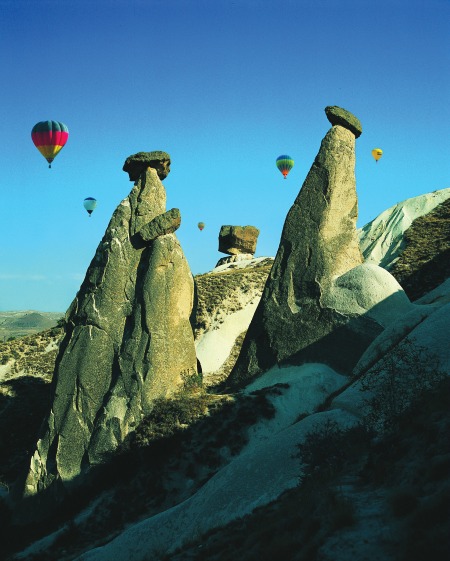 From afar – from lookouts or a hot air balloon – these chimney-packed valleys are remarkable, but given the name Cappadocia (from the Old Persian “katpatuka” meaning “land of the beautiful horses”) there’s only one way to see the phenomena up close.

I arrive at the hardly authentically named ranch, Dalton Brothers (named after the Lucky Luke villains), armed with minimum horse riding experience. Not a total novice, I still answer Ata’s query of “beginner, intermediate or advanced?” with the first – better to lag behind than break my neck getting thrown off Jolly Jumper. When I meet Ekrem, though, I feel the same calm I see captivate his horses. A legend of the area, he started the horse trek business on advice from a Canadian tourist and wears an American cowboy hat (a gift from a carpet-trading friend). But the ranch’s name aside, he’s a bona fide horse whisperer. 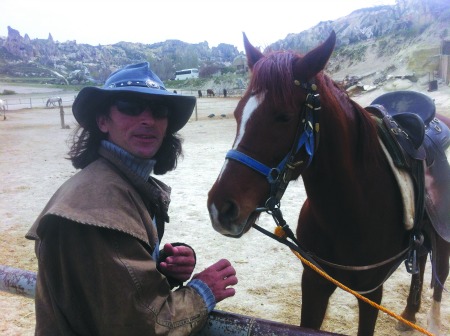 Leaning against a log fence at the front of his home, a couple of rooms carved into a cave, one horse previously running around like a wild animal comes up and puts its head on his shoulder. Turns out Ekrem catches the native mounts in Mount Argeus and breaks them in for his business and on commission. He explains the horses exist to walk this terrain, which I soon find as I’m negotiating inclines and declines so steep that when I lean back or forward to keep balance I’m in full contact with my horse.

I’m on the chestnut beauty, Dilber, who made her presence felt earlier. Ata tells me her name means a compliment for a woman with big lips. Ekrem’s horses are trained with the softest touch, his belief being that a horse treated sternly will be one that bites and kicks. His are trained with a loving hand and “sweet things” (treats of carrot and cucumber). I have neither with me, so rely on his employee Erhan, a friendly but quiet young bloke leading the way on an unruly grey (I’ll later be shown a newspaper story about Erhan’s skills at the game of cirit, what I can only explain as javelin warfare on horseback). Big Lips – not that I’d call her that to her face – is happy to follow and lead a Hong Kong couple riding their first horse. 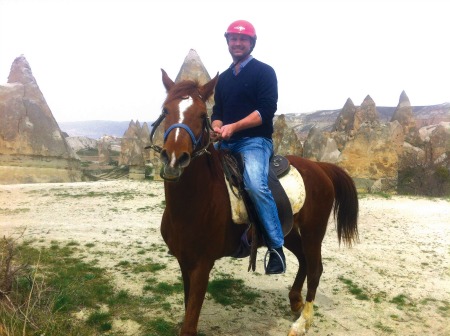 Up, down and around, it’s a sensory overload as we go through the almost silver Sword Valley, from where great Ottoman emperors would order weapons, horses and soldiers. I try to keep Dilber at a safe walk, but she knows this terrain better than me. When it looks like a slippery slope up, she gets a run up. If it’s steep down, she’s like a ballerina. After some hairy moments, and even more breathtaking views, we reach a cave tea house. We sip a refreshing brew and look down at our relieved steeds in the shade. I also realise that in all the rises and falls, we’ve gone quite high and will have to go back down. The trickiest bits are to come. 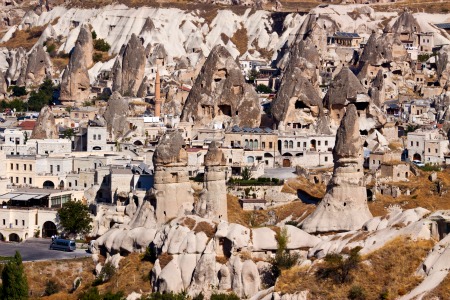 Within minutes, I reach the point at which I turn from a quasi-Cappadocian cowboy looking for a lasso to rope a chimney to a meek little wuss. Holding Dilber back for a moment, I just drop the reins, give her a pat and hope. “She’ll know what to do,” I think. She does, and loses respect for me from this point on. I guess I forgot Ekrem’s words as we left the ranch: “Gentle, but you are in charge now.” Had the apricot trees been fruiting, she would be devouring them, but instead she settles for every blade of grass in reach. I’m not bothered, though, as this landscape is so humbling and breathtaking that the disrespect of a horse is the least of my worries. As we wind back to the ranch through the Rose Valley, named for its pinkish blush, I feel my thighs protest and Dilber canters – she senses home and has had enough of this moron on her back. I take no offence.

My next saddle is one that won’t allow blame for anyone but me if there’s any misadventure. I’d seen quad bikes the day before, speeding around the perimeter of the narrow tracks Dilber negotiated with ease – their belligerent motors disrupting the absolute calm and occasional pigeon call (the fairies apparently became the worshipped birds when people arrived here). It looked like fun though, so I have to give it a run.

I meet my new instructor, Taci, at Oz Adventures in Göreme and find he too had showed Nic Cage around this amazing place. I’m helmeted and meet my new ride, a blue four-wheeler with tyres so low on air it can only mean one thing – rough terrain. Within minutes we’re whizzing up near vertical rises and sliding around corners. The tracks aren’t the small alleys we followed on the horses (bikes aren’t allowed) but rudimentary roads. The scenery plays second fiddle to the exhilarating ride and trying to keep up. 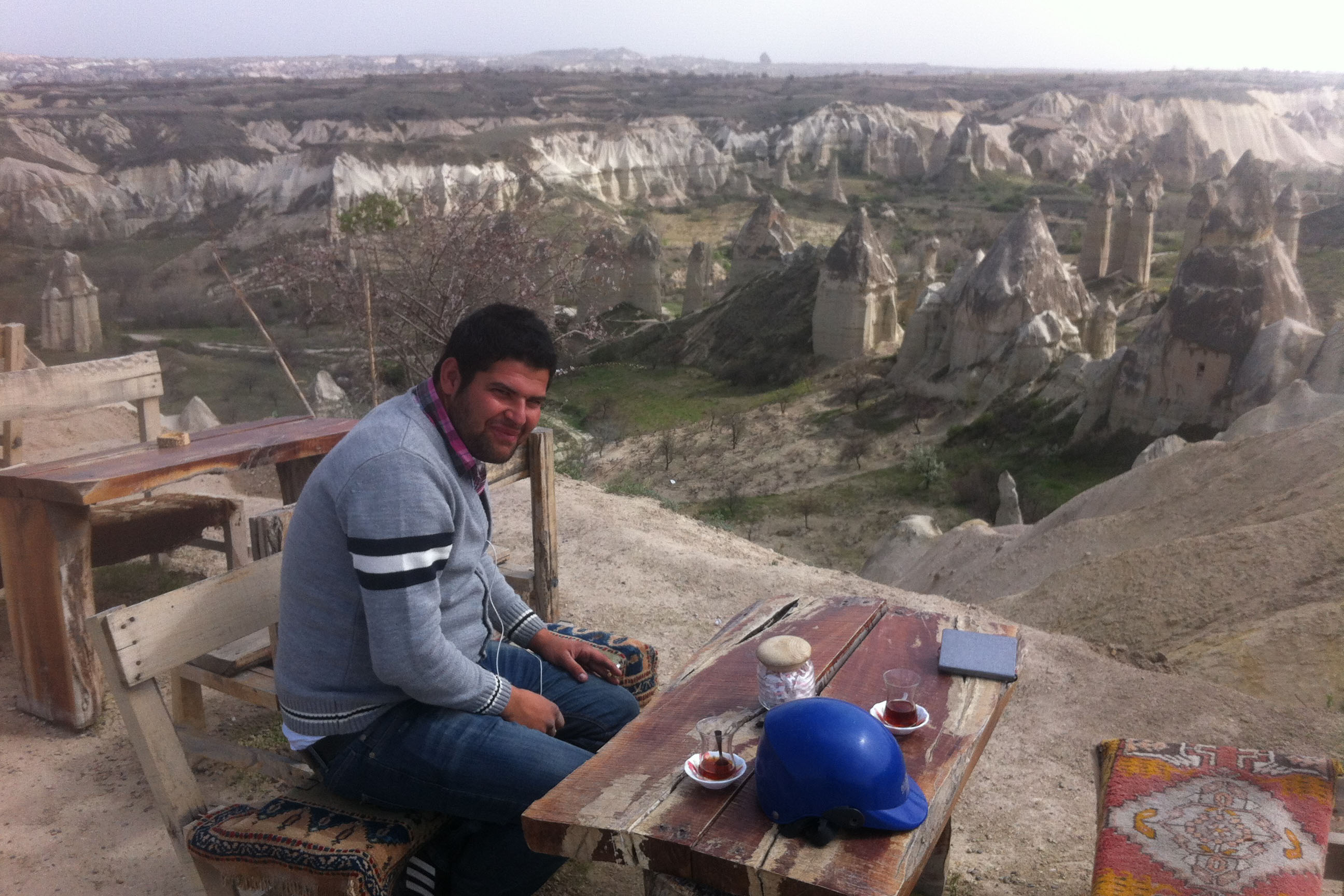 I follow Taci, who puts in headphones for music every time we take off, around the Love Valley. He waves his arms and sways as he speeds away from me, sometimes directing me to slow down for a road but most of the time just dancing. Taci’s a joyous bloke. Occasionally he jumps off a ledge (I occasionally follow) and gets up on two wheels (I don’t). At the top of the Love Valley we stop for tea, and gaze down at the rocky wangs. Juvenile thoughts aside, it’s stunning.

We then rip around and through the Rose and Red Valleys, and stop at a cafe for a pomegranate and orange juice. As we head back to Oz HQ, I start to recognise landmarks from the day before. How different do they look through dust-filled eyes? Immensely, but still incredible.

Hot-air ballooning
Look up at dawn on a clear day and it’s like a balloon festival across the valleys, with a kaleidoscope of floating baskets cruising around the fairy chimneys. From £60. goremeballoons.com

Goreme Open Air Museum
A must-see marvel of Cappadocia is this series of former cave monasteries and churches dating back to the 10th, 11th and 12th centuries. A guide is worth the extra expense. Entry £5. http://www.goreme.com/goreme-open-air-museum.php

Kaymakli Underground City
An incredible eight-storey city, fortress and refuge from the heat, you can see how people lived, made wine, kept animals and more. Tours are £35 for two people. goreme.com/kaymakli-underground-city.php

Whirling Dervishes Ceremony at Caravanseri
A double treat. A replica (real ones aren’t open to outsiders) Dervish ceremony, with hypnotic music and spiritual spinning, plus it’s held in a massive Caravanserai, a kind of inn on the Silk Road that served as a refuge for traders. The £30 fee includes a lift from your hotel and a traditional serbet (delicious hot spiced drink). goreme.com/whirling-dervishes-ceremony.php

Cross golf
Much of Cappadocia’s landscape is World Heritage-listed, so it’s no golf resort haven. But how about the challenge of hitting balls as they lie around natural obstacles into aerial goals instead of holes on the ground? Not cheap at £120 per person in a group of five, but once-in-a-lifetime. crossgolf.com.tr

WHEN TO GO: High season is from July to mid-September, but we went in early April and enjoyed the mild, comfortable spring climate.

GETTING THERE: Fly London Stansted to Kayseri, via Istanbul, from £232 return (inc. taxes) http://www.flypgs.com/en/

ACCOMMODATION: If you see a rock, it’s likely somewhere you can stay. Serinn House in Ürgüp is a boutique beauty, with simple facilities, enough mod-cons and personal touches from owner Eren. From £100pn with breakfast. Or pitch a tent among the fairy chimneys for £5pn at Nirvana Cave Hotel, Göreme.

Plan your trip to Turkey with TNT Tour Search.

Images via Thinkstock, TNT and Getty

BBQ in the desert