Bob Parsons, CEO of web hosting service Go Daddy, has defended his decision to shoot an elephant and post the video on YouTube as ‘helping starving people’.

In the video, filmed in Zimbabwe and drawing widespread condemnation from animal rights groups worldwide, Parsons comes across a village unable to defend itself against a marauding herd of elephants tramping crops and destroying houses.

Self-appointed defender-of-the-people Parsons and his travelling buddies camp out at night waiting for the elepahnts to arrive. A group of three finally show and when they try to charge the humans, Parsons fires twice., killing one.

He then poses triumphantly for pictures alongside its carcass.

The videos shows scenes, accompanied by AC/ DC’s Hell’s Bells, from the following day as vilagers hungrily carve the elephant apart – most of them, in a weird viral marketing opportunity, sporting Go Daddy baseball hats.

Parsons has remained unapologetic in the face of a torrent of internet abuse, saying he was asked by desperate local farmers to help solve the elephant problem.

“I’m not ashamed of what I did,” he said.” All these people that are complaining
that this shouldn’t happen, that these people who are starving to death
otherwise shouldn’t eat these elephants, you probably see them driving
through at McDonald’s or cutting a steak. These people don’t have that
option.” 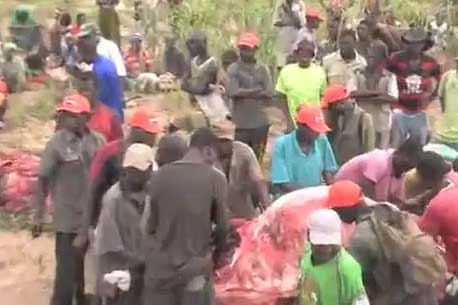 “[Critics] look at this from the context of being
Americans. We’re well-fed and isolated from the process of growing and
butchering meat. We see this, and we’re horrified. Their hearts are in
the right place, but they just don’t understand what’s going on over
there.”

He told mashable.com that avoided shooting
elephant cows because of the matriarchal structure of an elephant herd.
“Taking a bull has little or no impact on the social structure or herd
size,” said Parsons.

Although, that rationale is a little at odds with his next comment in which he admits he couldn’t see what he was aiming at:

“There was no moon, no stars; it was pitch dark. I
couldn’t see three feet in front of me. We were moving though the
field, and all we could do was use our hearing to find them. That took
an hour and a half.”

Although animal rights activists said there were other methods to deal with the elephant. However parsons scoffed at the idea.

“If you want
to go and try to chase an elephant out of a field with a beehive, I’ll
video it,” he said.

He then
posed the question, “If you had the choice to take a few
elephants or to let people starve, what choice would you make?”

He also answered the charges of him smiling as he poses next to the dead creature.

“I’m smiling because I’m relieved no one was hurt, that the crop was
saved, and that these people were going to be fed — the type of smile
when you get a good report card or achieve a goal.”

@Ben Bostrum tweeted: “I want 2 hunt Bob Parsons. “Have you cancelled your GoDaddy acct? I have.”

@coladam: “I’m going to find Bob Parsons and gut him with a fishknife.

@KerisDuul was a little more restrained:

“make an example of dr Bob Parsons we cant suffer this

Go Daddy’s competitor service namecheap was quick to capitalise on what many are seeing as a major PR blunder – it is offering domain transfers with a $1 donation to savetheelephants.com

PETA has also  cancelled their  account with Go Daddy  and is taking their
domain-name business elsewhere.

“Please email Bob Parsons and tell him you will not use Go Daddy’s services until he agrees to stop shooting animals,” spokewoman Michelle Sherrow said.

WATCH THE VIDEO BELOW. WAS PARSONS RIGHT OR WRONG? OR WAS HE JUST WRONG TO POST THE VIDEO AND DRESS THE VILLAGERS IN GO DADDY HATS?