Burger off: Aussie anti-McDonald’s protesters head to the US to speak to Maccas boss

The group from the village of Tecoma near Melbourne have objected to plans to build a 24hr McDonalds restarant in their local area of outstanding natural beauty, in the Dandenong Ranges.

The No Maccas in the Hills group inflated about 30 kangaroos at a Chicago McDonald’s as part of their fight block the company from building a fast food restaurant in Tecoma on Melbourne’s eastern outskirts.

Garry Muratore, a spokesman for the group, said the rally attracted a lot of attention.

“We were talking to the media guys there and they think Don will take notice when he sees it on Chicago media,” Mr Muratore told Channel Nine. I think they’ll open the doors and talk to us.”

The rally attracted radio and newspaper coverage, he said. 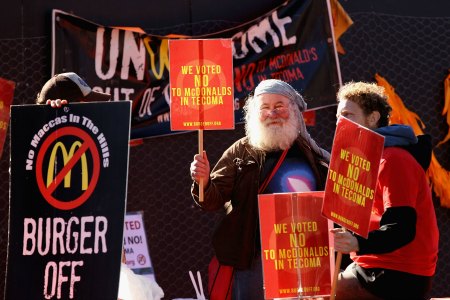 A half-page advertisement will run in The Chicago Tribune on Wednesday, US time, the day the Tecoma group plans to present a change.org petition with 94,000 signatures to McDonald’s head office.

The newspaper ad and the mission to the US was crowd-funded by donations from people who signed the petition. A total of $40,000 was raised.

“The local council said no, 92 per cent of our community said no, they’ve taken it to the courts, they’re suing community members, it’s time he looked hard at what this is doing,” Mr Muratore said.

“We’ve certainly become the little town that roared…the media see it as a David and Goliath story.” said the protest organiser.

Watch out @McDonalds #tecoma has arrived louder and prouder than ever saying NO to Maccas in the hills! #burgeroff pic.twitter.com/BRssw615kK