The brainchild of Bestival’s Rob Da Bank, Camp Bestival is geared up primarily for families, but don’t let the brats put you off. Neither me, nor the friend I went with, has kids or any desire to be surrounded by them, but there was enough music, performance, food and booze to keep us distracted from the pushchairs. 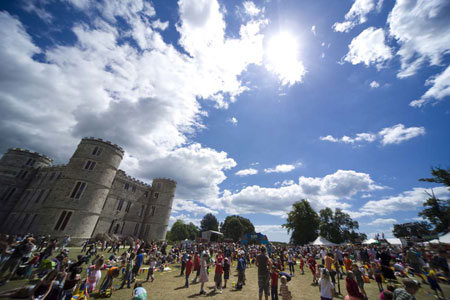 Blondie were headlining as we arrived on Friday night; Debbie Harry not quite so charismatic a presence as she was in her youth, but still in icon. The crowd were a mix of 80s-revival teenage fans and their parents, doing it for the second time around.

The next morning, hangovers in place, we avoided the Castle Stage like hell, as a performance of The Gruffalo threatened to tip our sanity over the edge. 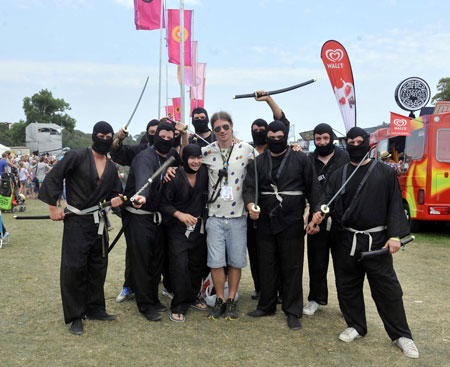 The theme this year was 'Medieval': So here, we guess, are some Medieval Ninjas, posing with festival curator, Rob Da Bank.

Instead, we went for hair of the dog in the Monkey Shoulder bar. Stepping inside a dimly-lit, apothecary-inspired treehouse, we were presented with cocktails made from fudge, ginger, lemongrass and Monkey Shoulder whisky. Sounds like it shouldn’t work? It did. 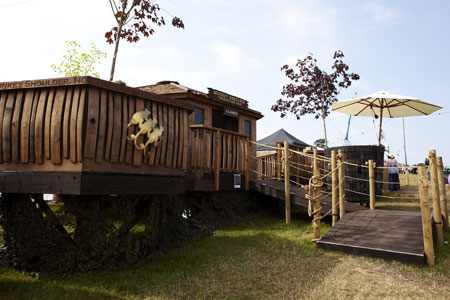 As with most festivals, half the fun is drifting around having random conversations and unexpected experiences and Camp Bestival is ripe for both of these (although the conversations may involve considerably less gurning than at other festies).

We checked out acrobatics on the Insect Circus stage, heard Howard Marks reading children’s stories, wandered amoung the sculpture-filled trees of the Dingly Dell, looked out over the Dorset hills from the Ferris wheel, watched a Royal Ballet Swan Lake flashmob, made some clay animals, had a massage and lay on silk-covered beds under coloured flags. 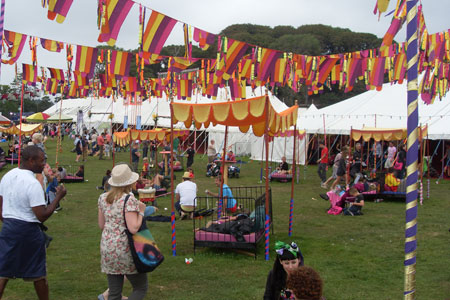 The Wonder Stuff on Saturday afternoon got the nostalgia going for those of a certain age. Miles Hunt – now slightly plumper – belted out 90s hits like Size of a Cow, the sun shone and, apart from the singer’s frightening dungarees, the world was a happy place.

If dinner at a festival is usually a bag of chips, then Camp Bestival will make you re-think. Seriously, this event is all about food. A highlight of our weekend was sitting down to a four-course meal in the amazing Kerstin Rodgers' – aka Ms Marmite lover – Underground Restaurant. We drank Prosecco, listened to Keith Allen playing the piano and ate salmon, ice cream and local cheese. 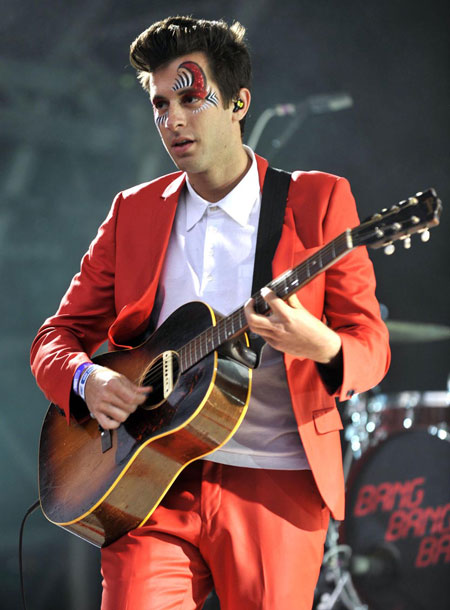 Mark Ronson on the Castle Stage at Camp Bestival.

Mark Ronson took over to an enthusiastic crowd as the sun set, paying tribute to Amy Winehouse with an acoustic version of Valerie – joined by Zutons frontman Dave McCabe – and a performance of Back To Black.

Saturday night was all about Groove Armada, however, and those who couldn’t stop dancing at the end of their set moved onto the Silent Disco to keep the party going.

Feeling worse for wear on Sunday, we stopped by Hugh Fearnley-Whittingstall's River Cottage Canteen Tent where a wood-fired oven and BBQ sizzled, serving up spicy mutton burgers along, spiced mackerel, field mushrooms and salads. We sat on a long table with a checked cloth and were soon full, cheered and ready for our first beer. 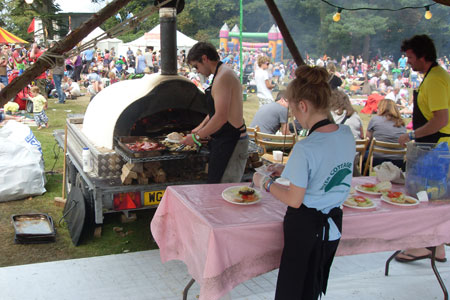 Music-wise, Sunday night was the big one at Camp Bestival, when Primal Scream played seminal album, Sreamadelica, in its entirety. We pushed to the front of the crowd to watch Bobby Gillespie and co strutting their stuff to an ecstatic audience. 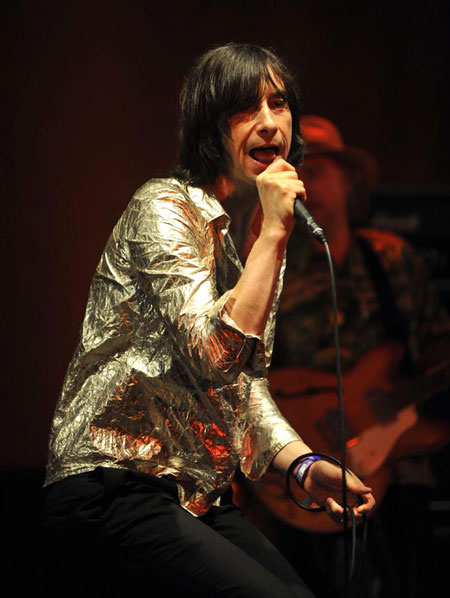 Only the sight of a spectacular firework and light show on the castle behind stopped the crowd clamouring for more as the Scream left the stage.

One last treat was in store as we wandered home after a final drink in Gizzi Erskine’s Tiki Lounge. South London poet/ rapper Kate Tempest closed the festival for us, mesmerising the Big Top tent with her high-energy delivery and close-to-the-bone lyrics.

If you’re looking for a wild bender, Camp Bestival probably isn’t for you. But for a chilled, colourful weekend pretending it’s your school holidays again, it can’t be beaten.

Kuala Lumpur to Singapore: how to do it