10:00 Begin your weekend with a splash by taking on the raging white-water rapids that can be found in the heart of the city in the recently spruced-up Cardiff Bay area, Europe’s largest waterfront development.

Cardiff International White Water offers thrill-seekers the chance to go rafting (£50pp for a two-hour session) or tackle the rapids on a “hydrospeed” float, ?similar to a bodyboard (£55pp for three hours).

If you’re ?on the hunt for a new white water challenge, grab a mate and enjoy a bumpy ride in a hot-dog, a two-person ?inflatable kayak (from £50pp for two hours).

12:30 Chow down on contemporary, locally sourced food at Ffresh Bar & Restaurant (wmc.org.uk), which affords sweeping views over Cardiff Bay. Meals are £14.95 for two courses or £17.95 for three. Dishes have a Welsh-tastic flavour: think Welsh goats’ cheese souffle for starter, Welsh lamb shoulder for main and Welsh cheese for dessert.

13:30 Tour Millennium Stadium, a venue that has helped place Cardiff firmly on the world’s sporting map since it was built in 1999.

As well as hosting the Rugby World Cup and the FA Cup finals, big-name acts such as Madonna, the Rolling Stones, U2, Oasis and Take That have performed at the 74,000-seater stadium.

Visitors can mooch about the changing rooms and explore the Royal Box. Tours last for 60-75 minutes and cost £7.50pp. Book by visiting the above website.

14:45 Break for a cup of chai at the award-winning Waterloo Gardens Teahouse, which boasts more than 50 loose-leaf teas, coffees made with freshly roasted beans and legendary cakes: think ginger and pear, parsnip and orange, or chocolate and beetroot. 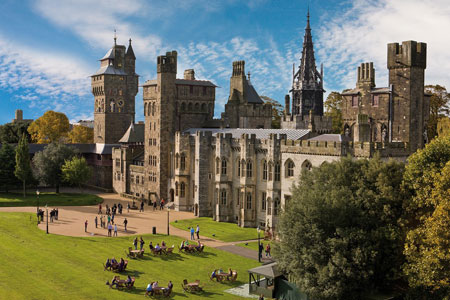 15:15 Sprawling out into the city centre is the 2000-year-old Cardiff Castle, which is worth pottering around. The interior drips in Victorian bling, with rooms lavishly festooned with marble, polished wood and chandeliers. Tickets are £11pp.

16:00 A must for art lovers is a rove around the National Museum Cardiff, which possesses the finest collections of impressionist paintings outside ?Paris, including works by Renoir, Monet and Cezanne, bequeathed to the gallery by two minted Welsh spinsters, the Davies sisters.

19:00 Awash with bars and restaurants is the city’s vibrant waterfront  Mermaid Quay, in Cardiff Bay. Get your camera ready to pap the Wales Millennium Centre, the beetle-shaped slate, iron and glass performing arts centre. Its futuristic-style exterior provided the backdrop for scenes in Doctor Who.

21:00 ‘Cwtch’ is Welsh for ‘cosy’, a word that suits this drinking hole well. With its huge sofas, welcoming fireplace and pieces of local art, Cwtch Bar is a great ?spot for lounging, while sipping on cocktails or wine. ?

22:00 Chill out to jazz at Cafe Jazz. There’s live music every night of the week, including ?a jam session on Monday nights and blues on Fridays.

11:00 Within 15 minutes of Cardiff city centre is Llanerch Vineyard, which produces award-winning Welsh wines. Set in the picturesque Vale of Glamorgan, Llanerch offers woodland and lake walks, and wine tasting. It has a cooking school and a top-notch restaurant in which to grab lunch. 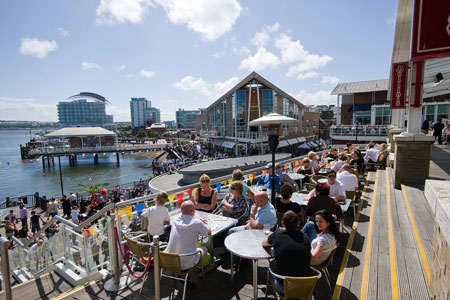 14:00 Hire a bike and explore the wild Welsh countryside by following part of the Taff Trail, which begins at Cardiff Bay and ends at Brecon, 88km away.

19:00 Back in the city, get stuck into traditional Welsh tucker at Cegin y Ddraig, sited opposite the city’s fairytale castle.

This small independent brewery has a warren of cubbyholes and squishy sofas in which to get comfy, while supping on ales and lagers, and soaking up views of the bay.

Travel with First Great Western from Paddington to Cardiff Centre (2h7mins) from £77 return or National Express  from Victoria to Cardiff (3h20mins) from £11 return. For city info: visitcardiff.com

What is Apple iCloud?