We are really excited. We’ve done quite a few gigs with them, but not for a while.

Indeed, you’ve played live with them a lot since they spotted you in Paris in 2006 – do you become competitive?

It’s hard to say we are competitive – you can’t compete with the people who started a whole scene.

We get a lot of people who come up to us saying they want to be like The Prodigy, but you just can’t.

We were playing a gig in Dusseldorf recently, though, to 7000 people, but Keith [DJ] missed his flight.

I had to do the set alone and it wasn’t the best show and The Prodigy guys were backstage shouting: “You’re a one man band!”

So how did you and Keith start out?

We used to have an indie band, but to finance it we were producing electronic music and remixing.

Then the electronic music started to do better than the band and we began to combine the two.

We’d learned a lot about performing from playing live so we had the confidence that a normal DJ who just puts his headphones on doesn’t.

And that’s why The Prodigy like us, as our performances are wild.

What did you learn about performance from Keith Flint and The Prodigy guys?

Lots of stuff, like looking at the audience while you’re playing.

It’s important to get that connection in a live show. And also that you have to prepare mentally and physically for shows. We go into training for a tour!

What is your preparation routine?

We do a whole day of prep for a show, and when you are on tour, your stamina does build up.

On the flipside, though, when you have been in the studio for a week, like we just have, and then go back out on the road, that is when it hits you. Your strength has gone down, you know? We are only human.

What did you learn production-wise from touring with Pendulum?

You just pick up stuff immediately, anywhere and everywhere, no matter who you’re touring with.

But when we were trying to do the live set up, we used certain electronic programmes on stage to keep the sound really tight, and a lot of that we learned from Rob [Swire] and Gareth [McGrillen], who are both now in Knife Party [now Pendulum’s original line-up has disbanded]. 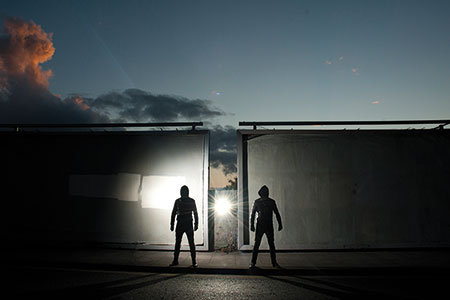 You draw on a lot of different genres, but who are your main influences?

A lot of early stuff like Gary Numan, as he mixed electronic music with guitars. We did a track with  him which was the best day ever! Bands like Metallica and Rammstein all relate to our music, too.

The influence is not too much in your face but it is there, especially on songs like Jaw Drop [off the new Hollywood EP].

And then people like Skrillex too, who’s inspiring because he has made an entirely new thing all of his own.

Dubstep was there already, of course, but not in the same way.

The crowds at rock festivals fucking go for it, they’re always moshing to every hi-hat and beat.

But if you go to clubs where there are a load of girls rather than heavy metal guys, you know what you have to play.

We don’t compromise much with our music but you do sometimes have to bend the rules a bit.

We DJ-ed after Iron Maiden’s Sonisphere [Festival] set – get that wrong and you’d probably get stabbed.

What was your best ever gig?

Our first gig in Japan was amazing. And supporting Rage Against The Machine at Finsbury Park in 2010 [for the free concert the LA rap-rock band put on after a Facebook campaign made them 2009’s Christmas number one].

That was a really weird one, as we were playing electronic music to a crowd that only really wanted to hear fuckin’ Rage.

Why the trademark hoodies you wear?

The first time we had a photoshoot we did it with hoodies.

So we thought, “Fucking hell it’s working, let’s stick with it.” It’s kind of our symbol now.

Do you believe 2012 will be the end of the world, as the Mayans do?

They got a lot of things right, but this isn’t one of them.

We have worked really hard to get here – if the fucking world did end I’d be pissed off!

Save money with deals at Boots, Eurostar, British Airways and John Lewis