But the occasion was marred by controversy before and during the match, with sections of Chelsea’s support chanting and jeering during a minute’s silence prior to kick-off to mark the anniversary of the 1989 Hillsborough disaster in which 96 Liverpool fans died.

Chelsea were also the beneficiaries of a deeply disputed decision by referee Martin Atkinson for their second goal, scored by Mata, which replays showed should not have stood after the ball failed to cross the line.

Bale briefly gave Tottenham hope of a fightback with a goal on 56 minutes to make it 2-1 but a sublime finish from Ramires, a stunning 35-yard free-kick from Lampard and a late effort from Malouda took Chelsea out of sight.

Chelsea captain John Terry later admitted Mata’s goal should not have been awarded.

“I thought Mata’s strike hit me and didn’t go over (the line), but the linesman’s seen it and given it,” Terry told BBC radio.

“I honestly don’t think it went over the line but the linesman gave it and there’s nothing we can do about that.” 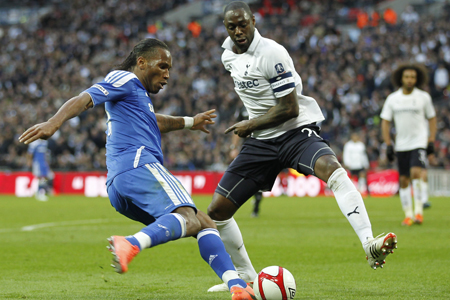 Tottenham manager Harry Redknapp was philosophical about the refereeing blunder that gifted Chelsea a two-goal cushion.

“It was nowhere near a goal,” Redknapp said. “It’s an honest mistake but it wasn’t anywhere near over the line.”

Chelsea manager Roberto Di Matteo, whose side face Barcelona in a Champions League semi-final on Wednesday, sympathised with Spurs.

“It hasn’t crossed the line so in this case we were on the lucky side but many times before we had decisions going against us,” Di Matteo said.

“But we didn’t score only two goals we scored five so I’m not sure how much it mattered.”

Earlier, Tottenham appeared to be the likeliest to break the deadlock in a first half that was slow to get going, only to be denied by the woodwork and a goal-line clearance from Terry.

Yet just when it seemed Spurs were on the verge of an opener, Chelsea took the lead with a goal on 43 minutes that owed everything to the raw power of Drogba. 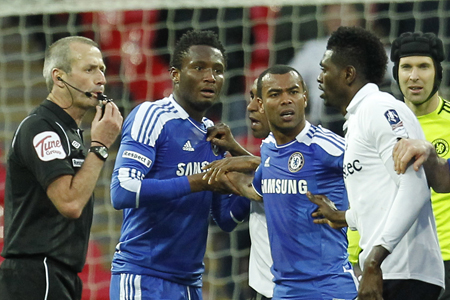 A long ball forward from Lampard found the Ivorian, who held off William Gallas and turned before crashing an unstoppable shot past Carlo Cudicini for 1-0.

Chelsea appeared to be intent on killing the game off early in the second half, Cudicini making a brilliant one-handed save from Mata on 48 minutes to deny the impish playmaker once more.

But Chelsea were to double their lead in controversial circumstances from the ensuing corner.

Cudicini pulled off another stunning block to keep away David Luiz’s near-post header, but the ball fell only as far as Mata.

The number 10’s shot flew hard and low into the goal-mouth and hit a tangle of bodies on the goal-line.

Referee Atkinson hesitated before awarding the goal but television replays appeared to show that the ball had not crossed the line.

Tottenham’s players protested but Mata and Chelsea celebrated a 2-0 lead.