Qantas and Virgin have cancelled all flights into and out of Sydney and Melbourne.

Adelaide airport has been shut and Canberra routes have also been affected by the ash cloud from Chile’s erupting volcano. 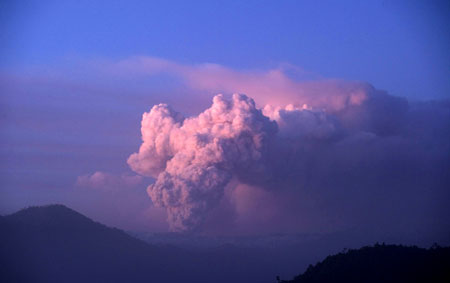 The last week has already seen tens of thousands of air travellers stranded and hundreds of planes grounded because of the ash cloud from Cordon Caulle in southern Chile.

Six days ago the ash appeared above Australia and New Zealand causing flights to be disrupted but by Friday all were running normally again.

However the ash cloud has returned and is now dangerously low over Australian airspace with a base height of 20,000 feet.

All planes taking off and landing would currently have to fly through the ash cloud. 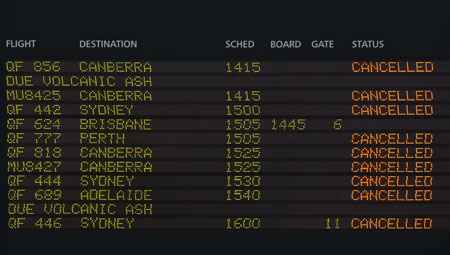 "The volcano has remained active and as of the 9th of June, the ash plume from the original eruption has travelled across the southern Atlantic Oceans and under Africa to stretch into the Indian Ocean," the advisory centre stated.

"It is not unprecedented for volcanic ash to remain suspended for long time periods."

“It will be clearing from the mainland during the day tomorrow and it should be clear of Tasmania tomorrow night.

“So we're still looking at a short, sharp event.”

Qantas has cancelled flights to New Zealand while its budget airline Jetstar grounded flights in Sydney, Adelaide and Canberra.

"Safety is our first priority and a number of flights have been cancelled or rerouted to avoid the volcanic ash cloud," Qantas stated on its website.

Virgin Australia has also cancelled all flights to Adelaide, and flights through Canberra, Sydney and Melbourne.

“It's sitting quite low and we're not comfortable flying at those levels,” a Virgin spokesperson said.

“At the moment it does look that it will affect services tomorrow.”

Bergerac to Girona in the coolest of campervans

Ricky Gervais: “I’m writing full series of Derek,” Us: “Don’t feel you have to”

Barclays are pulling out of Boris’s London bike scheme