A Chinese farmer has been firing a homemade cannon to battle property developers trying to evict him from his land.

Yang Youde’s improvised cannons are made out of a wheelbarrow, pipes and fire rockets, can travel over 100 metres, and explode with a deafening bang, according to the Chinese press.

Land seizures have been a problem for years in China, and have given rise to the term ‘nail house’ to describe a holdout tenant or occupant, likening them to a nail refusing to be hammered down.

“I shot only over their heads to frighten them,” Yang told the China Daily. “I didn’t want to cause any injuries.”

Yang was attacked by an eviction team in February after his rockets ran out, but local police came to his aid.

In May, Yang held off 100 people by firing his weapon. 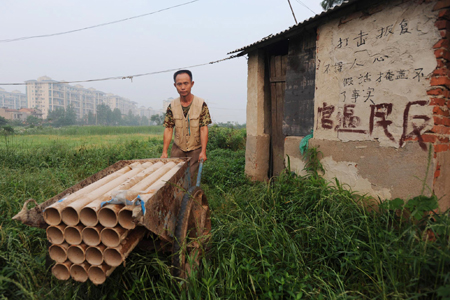 Making it fit: how to cope in a home thatâ€™s too small

Have you signed up for the Standard Chartered Great City Race?